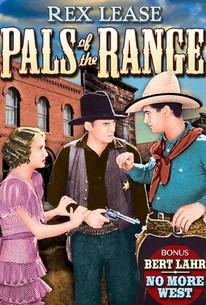 Directed by the veteran Elmer Clifton, Pals of the Range was yet another attempt at turning journeyman actor Rex Lease into a viable B-Western hero. Lease plays Steve Barton, a ranch hand promised 1,000 dollars if he can turn the Circle Ranch into a profitable venture. The dilapidated ranch has become the victim of the neighboring Circle B outfit who has been stealing the cattle and adding the letter "B" inside the brand. While investigating, Steve is accused of shooting and paralyzing Tom (Joey Ray), an innocent bystander, but manages to convince the sheriff (Bud Osborne) of his innocence. Tom reveals the true culprit, the rustlers are apprehended, and Steve earns enough money to bankroll his prospector friend Gold Dust (Milburn Morante).

Bill Patton
as The Stranger

Tom B. Forman
as "Uncle"

Critic Reviews for Pals of the Range

There are no critic reviews yet for Pals of the Range. Keep checking Rotten Tomatoes for updates!

There are no featured reviews for Pals of the Range at this time.

Pals of the Range Quotes