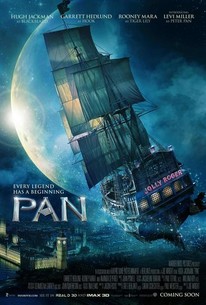 Critics Consensus: Pan finds a few bursts of magic in its prequel treatment of classic characters, though not enough to offset the rushed plot and shrill, CGI-fueled action.

Critics Consensus: Pan finds a few bursts of magic in its prequel treatment of classic characters, though not enough to offset the rushed plot and shrill, CGI-fueled action.

Critic Consensus: Pan finds a few bursts of magic in its prequel treatment of classic characters, though not enough to offset the rushed plot and shrill, CGI-fueled action.

The story of an orphan who is spirited away to the magical Neverland. There, he finds both fun and dangers, and ultimately discovers his destiny -- to become the hero who will be forever known as Peter Pan.

Tony Allen
as Himself
View All

Parental Guidance: How Family-Friendly Are Daddy’s Home, Concussion, and Joy?
On DVD This Week: Pan, Pawn Sacrifice, and More
Box Office: Goosebumps Scares Off Its Competition

Because between the inadvertently hilarious and the downright offensive, Pan is a generic mold for a reboot that shares little with the original beyond a handful of proper nouns.

For the most part this is as flimsy as Tinkerbell's wings: big on gossamer sparkle, low on substance.

Wright stages some very colourful set-pieces, but the film-making never takes wing. It doesn't help that the performances are as broad as any you will find in a pantomime at the Hackney Empire.

The overuse of CGI effects in Pan is exhausting and incomprehensible, even within the crazed logic of a fairytale.

The title signifies that deeply special and mythical "Pan" down which all your cinematic hopes must be flushed. ... Or maybe there's a missing "i" between the second and third letters.

Come back, Steven Spielberg's Hook! All is forgiven.

It'll certainly keep your kids entertained, but that's all that it will do. Pan does little to add to the classic tale (...) and fails to make an impression that lasts.

A noisy conclusion to the story allows the special effects to take over and Pan becomes a little less magical and a bit more mundane.

A mess, and no amount of exposition is going to tie it together.

I am pretty much sure most adults would find it to be such a waste of time. If there is going to be a sequel, I really can't say... but I hope they make it much better...

Why are all these pirates singing a 90's grunge anthem while navigation a flying boat in the middle of Neverland? [Full review in Spanish]

The prequel telling about Peter Pan's first steps in Neverland and his friendship with young Captain Hook looks mostly amazing. Its colorful almost theater-like sets, costumes and ships fit perfectly to Spielberg's Hook. There are plenty of fast, exciting action scenes and yet, the film doesn't manage to grab you by the collar. It's all fairly entertaining and easy on the eye but also a bit bland, mostly because the plot is not all that interesting. Still, kids should have a blast with this. It's just somewhat disappointing that the film does not end up explain Pan and Hook's rivalry, here they are still friends as it comes to an end.

Joe Wright's Pan sails in shallow waters. There isn't much meat on this 105 minute bone. The plot details are simplified, which is acceptable, but once the film leaves the first act, a lot is delivered. Combine that with the light explanations and the story becomes a bit of a mess. The visuals are bright and colorful; fitting for a PG movie, which this is. Some of it is a delight, while others come across as a bit much. The action pieces are fun and acceptable. The characters are hollow, leaving much more to be had, while the casting is hit and miss. Levi Miller gets it done from time to time. Rooney Mara is a delight to see, but falls way flat with her character. Hugh Jackman and Garret Hedlund are the life of the film, with the latter being somewhat questionable for James Hook. Pan has flying colors, but it doesn't pass with flying colors. It just sails on by.

It's big and rollicking and loud. And meant for kids, which justifies its quick pacing with not a lot of time spent "getting to know you". A big, greasy McDonald's hamburger of a film, which is to say that there is a fun quotient in operation, but whether it's healthy or no remains in question.