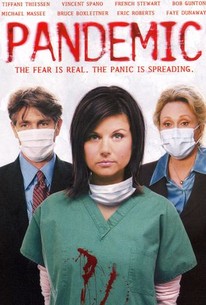 Armand Mastroianni, the gifted director of the legendary 1980 horror sleeper He Knows You're Alone, returns to helm the three-hour, all-star medical miniseries Pandemic. The program explores the lethal consequences that can unfurl when a deadly plague, with an unknown cure and an even more mysterious source, worms its way through the denizens of a terror-stricken metropolis. 90210's Tiffani-Amber Thiessen stars as Dr. Kayla Martin, an epidemiologist at the Center for Disease Control. When the news arrives of a plague victim on board a flight from Australia to LAX Airport in Los Angeles -- who promptly dies amid body-racking convulsions and a record-high fever -- Dr. Martin makes the pivotal decision to quarantine all passengers at LAX, sending the city, and the mayor (Eric Roberts), into an uproar. Meanwhile, the plague concurrently begins to appear in other areas of the city -- suggesting a beast that no one can even begin to contain. In time, the disease becomes known as "The Riptide Virus." As a thoughtless ACLU attorney schemes to wage war against Dr. Martin for an unlawful quarantine, Martin, her associate Carl Ratner (French Stewart), and FBI Agent Troy Whitlock (Vincent Spano) race to find a solution before time runs out. Faye Dunaway also co-stars.

There are no critic reviews yet for Pandemic. Keep checking Rotten Tomatoes for updates!

This was an enjoyable watch (for a movie about pandemics), though it was very clearly made for T.V. and doesn't really stand out as a film. Thiessen's character was very one-dimensional and the story itself didn't have much depth.