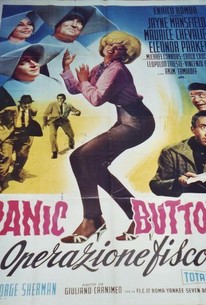 A businessman enlists the acting talents of two cinematic stars in the comedic romp Panic Button. After developing some tax problems, Frank Pagano (played by Michael Connors) decides to make a feature film version of William Shakespeare's +Romeo and Juliet, and hires two star talents (played by real-life stars Jayne Mansfield and Maurice Chevalier) to act in it, and lands a top-notch director (Akim Tamiroff) to helm the movie. The film becomes an unexpected smash, as critics and audience alike view it as a comedy and it premieres to acclaim at a popular film festival. The film is directed by George Sherman and Giuliano Carnimeo.

Vincent Barbi
as Mario
View All

There are no critic reviews yet for Panic Button. Keep checking Rotten Tomatoes for updates!

There are no featured audience reviews yet. Click the link below to see what others say about Panic Button!