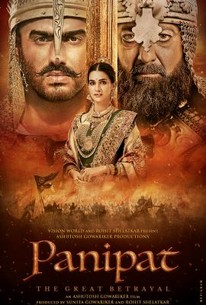 PANIPAT is set in 1761, when the Maratha Empire had reached its zenith and their grip on Hindostan reigned supreme with no-one to challenge them until an invader set his eyes on the throne of Hindostan. That's when Sadashiv Rao Bhau (Arjun Kapoor), the Commander-in-Chief of the Maratha army led a northern expedition in order to repel the invading forces of Ahmad Shah Abdali (Sanjay Dutt), the King of Afghanistan. This War epic entails the events that led to the Third Battle of Panipat.

This is an interesting chapter of history to revisit, because the winners were not the real heroes of the Third Battle of Panipat.

Gowariker may have taken liberties with history, but doesn't play around with the form. He sticks to the tried and tested, the long and langourous and old-fashioned. However, he is unable to achieve the epic sweep...

The screenplay is essentially a check-list of events that are being ticked off...

...did Panipat, which clocks in nearly three hours run time, need to be quite such a drudge?

Falsification isn't the film's worst aberration... Panipat is anything but engaging.

Panipat: The Great Betrayal as it's called - feels like one too without the requisite emotional playoff or enough visually arresting scenes. In the end, it's all reduced to a boring history lecture that lasts almost 3 hours.

What could've been a worthy historical epic with all the visual ingredients and an interesting historical foundation in place is ultimately just a tired expression of Bollywood nationalism, with bad acting to boot.

If you keep the history books aside and ignore his flaws, the depiction of the undisputed valour of Marathas such as him is brought up nicely in Panipat.

None of this bloodshed would have happened had these men just checked their egos...the political might, which becomes the flavour of this film, makes the storytelling easy to consume.

Watch the film for its opulence, it's well-choreographed fight scenes, as well as a colourful lesson in history. It might not be all accurate and yet gives you a sense of place and time...

Panipat delves into a significant chapter in history and is a war drama that lauds the unshakeable bravery, courage and the strong principles of the Marathas.

Sreeparna Sengupta
The Times of India
View All Critic Reviews (14)

There are no featured reviews for Panipat at this time.