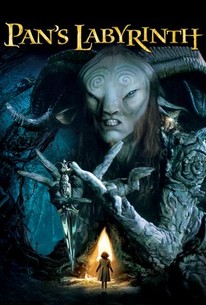 Critics Consensus: Pan's Labyrinth is Alice in Wonderland for grown-ups, with the horrors of both reality and fantasy blended together into an extraordinary, spellbinding fable.

Critics Consensus: Pan's Labyrinth is Alice in Wonderland for grown-ups, with the horrors of both reality and fantasy blended together into an extraordinary, spellbinding fable.

Critic Consensus: Pan's Labyrinth is Alice in Wonderland for grown-ups, with the horrors of both reality and fantasy blended together into an extraordinary, spellbinding fable.

Mexican filmmaker Guillermo del Toro returns to the phantasmagorical cinema that defined such early fare as Cronos and The Devil's Backbone with this haunting fantasy-drama set in the aftermath of the Spanish Civil War and detailing the strange journeys of an imaginative young girl who may be the mythical princess of an underground kingdom. Her mother, Carmen (Ariadna Gil), recently remarried to sadistic army captain Vidal (Sergi Lpez) and soon to bear the cruel military man's child, shy young Ofelia (Ivana Baquero) is forced to entertain herself as her recently-formed family settles into their new home nestled deep in the Spanish countryside. As Ofelia's bed-ridden mother lies immobilized in anticipation of her forthcoming child and her high-ranking stepfather remains determined to fulfill the orders of General Francisco Franco to crush a nearby guerilla uprising, the young girl soon ventures into an elaborate stone labyrinth presided over by the mythical faun Pan (Doug Jones). Convinced by Pan that she is the lost princess of legend and that in order to return to her underground home she must complete a trio of life-threatening tasks, Ofelia sets out to reclaim her kingdom and return to her grieving father as Vidal's housekeeper Mercedes (Maribel Verd) and doctor (Alex Angulo) plot secretly on the surface to keep the revolution alive. ~ Jason Buchanan, Rovi

Inigo Garces
as Young Guerrilla No. 1

Fernando Tielve
as Young Guerrilla No. 2

It's so audacious and so technically accomplished, and arrives here garlanded with so many radiant superlatives, that I wish I liked it more.

The story is a compelling and deeply involving one, and the film is both beautiful, exciting, and sometimes horrifying. The creature effects are superbly handled.

It's less of a labyrinth than a forest path, one that takes you through wonderful scenery but doesn't lead anywhere.

We are never allowed to get truly lost in Pan's Labyrinth. The fantasy sequences are fetching when they should be intoxicating, while the scenes above ground are largely prosaic.

Watching the unique explosions of Guillermo del Toro's mind realise themselves on screen is truly astounding.

Pan's Labyrinth proved that del Toro's most intimate and imaginative stories are also his most resonant and beautiful...

Insert list of superlatives here - I just love this film so so so so much.

It's rare to see a production of such breathtaking magnitude, with an absolutely singular vision and spellbinding fantasy components.

PAN'S LABYRINTH harks back to a time when fairytales were dark and filled with life lessons prior to the tales being taken up by Disney's more family-friendly hands.

His (Toro's) incredible visual style, uncanny CGI world, and gift for a particular style of storytelling knock this out of the park.

A very enjoyable film, that is well directed and has all round good production levels. It's almost like two films in one running side by side. It would have been a bit more interesting to see more of the fantasy characters and their world in which they live in. The film can be quite bloody and violent at times to which was a surprise, this is definitely for an adult audience.

Del Toro creates a magnificent fairy tale for grown-ups in which the innocence of fantasy collides with the horrors of war - and the result is a devastating, poignant and unforgettable film of lyrical beauty, with astonishing visuals, great performances and a wonderful score.

A little girl and her pregnant mother are relocated to an army camp to be with the unborn baby's father, an officious and sadistic captain in Franco's fascist military. Pan's Labyrinth is a gothic fantasy that sees a young girl escape into a world of fauns, fairys and political allegory to escape her cold, cruel, clockwatching, jack-booted step-father who is a kindred spirit of Schindler's List's Goethe. Once again Del Toro blends beautiful imagery with an affecting war story and the result is an enchanting experience that mirrors the fight between good and evil in both the real world and a young child's imagination in a way that reminded me a lot of the work of Hayao Miyazaki. Young Ivana Baquero puts in a performance that belies her tender years and the stunning visuals create a fantasy world that is beautiful yet conveys a suitably dark and disturbing undercurrent in Guillermo Del Toro's inimitable style. The two stories didn't quite gel together for me, feeling more like two separate stories told in parallel and so I must admit I prefer The Devil's backbone, but fans of Tim Burton and Jeunet will adore it.