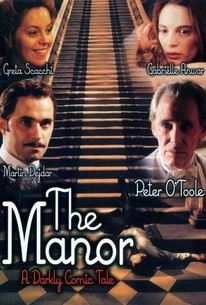 In this spoof of old-fashioned murder mysteries, Detective Tomas Hatcher of Scotland Yard (Martin Dejdar) is dispatched to Ravenscroft Manor to investigate the murder of Patrick (Matt Hantley), who has been working at the palatial estate as a stable boy. Hatcher quickly discovers nearly everyone has a secret, even Mr. Ravenscroft (Peter O'Toole), whose recent death doesn't stop him from making an occasional appearance around the house, often in very tasteful drag. It also seems that Patrick is very much missed by the women of the house, including Mrs. Ravenscroft (Greta Scacchi), her daughter Gillian (Laura Harris) and Gillian's governess (Gabrielle Anwar), all of whom were sleeping with Patrick at one time or another. Jealousy may be the killer's motivation, but given's Patrick's fondness for freely sharing his love, how do you narrow the suspects down to only one jealous party? Leading man Martin Dejdar also co-produced The Manor, which was the first Czech-financed film to be shot entirely in English; while little known in America, Dejdar is a major star in his native land.

There are no critic reviews yet for Panstvi. Keep checking Rotten Tomatoes for updates!

There are no featured audience reviews yet. Click the link below to see what others say about Panstvi!