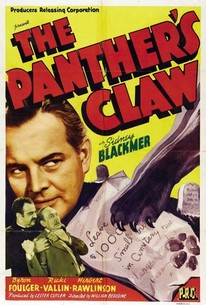 Sidney Blackmer stars as Anthony Abbott's analytical police commissioner Thatcher Colt in this above-average PRC murder mystery. When spiteful opera star Nina Politza (Gerta Rozan) is murdered backstage, Colt endeavors to prove the innocence of the troupe's wigmaker, Everett Digberry (Byron Foulger). The foremost suspect is drunken tenor Endico Lombardi (Joaquin Edwards), but Colt isn't discounting the less guilty-looking members of the troupe. As the clues are pieced together, Colt comes to a startling conclusion, one which manages to make him "right" and "wrong" all at once. The beauty of The Panther's Claw is its exploitation of the Hollywood typecasting system: the actual murderer is played by one of those actors who never had the intestinal fortitude to "do it" in any previous movie-mystery appearance.

Critic Reviews for The Panther's Claw

There are no featured reviews for The Panther's Claw at this time.