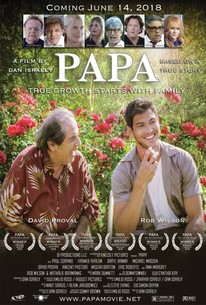 A college student who was adopted as a baby (Robert Scott Wilson) is unhappy despite his privileged upbringing in Beverly Hills. He decides to search for his biological dad and tracks down a man (David Proval) with his birth father's name at a mental institution. He begins working at the facility to find out if this man could be his father. His quest disrupts his relationship with his girlfriend (Mischa Barton) and his adoptive parents (Frankie Avalon and Daryl Hannah). Written and directed by Dan Israely. Ann-Margret, Michael Madsen and Eric Roberts co-star.

There are no critic reviews yet for Papa. Keep checking Rotten Tomatoes for updates!

There are no featured audience reviews yet. Click the link below to see what others say about Papa!