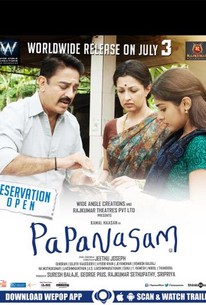 Papanasam is an upcoming Tamil drama thriller written and directed by Jeethu Joseph and starring Kamal Haasan and Gautami in the lead roles. The film also stars Asha Sarath, Anant Mahadevan, Kalabhavan Mani, M.S Bhaskar, Nivetha Thomas and Esther Anil in other pivotal roles. Shooting commenced in August 2014 and the film is expected to be released in 2015. (C) Official Site

Kamalahaasan, with his epic histrionics, holds the drama together. It's his film all the way and he digs into the role with relish, with Gautami giving him graceful company.

Length gives Papanasam the air of a slowburn modern morality play, winding its way through to a slyly concealed final twist.

'Papanasam,' is a gripping tale that is unpredictable and leaves you stumped in the end.

The best thing about Papanasam is how convincingly it makes us forget the original Drishyam, and manages to stand on its own.

M Suganth
The Times of India

One of the nicest aspects about Jeethu Joseph's Papanasam in Tamil is the return of Kamal Haasan as we all once knew him, the great master actor.

There are no featured audience reviews yet. Click the link below to see what others say about Papanasam!