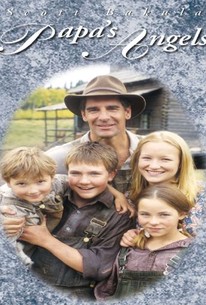 The lingering illness and death of his beloved wife has left young Appalachian farmer Grins Jenkins (Scott Bakula) a melancholy shell of his ebullient former self. As Christmas approaches, Jenkins can find no discernable reason for going on with his own life. But Grins' four spunky and resourceful children not about to let their father wither and die of a broken heartt. Based on a novel by Collin Wilcox Patton and Gary Carden, and filmed on location in Alberta, Papa's Angel was broadcast by CBS on December 3 2000.

There are no critic reviews yet for Papa's Angels. Keep checking Rotten Tomatoes for updates!

There are no featured audience reviews yet. Click the link below to see what others say about Papa's Angels!