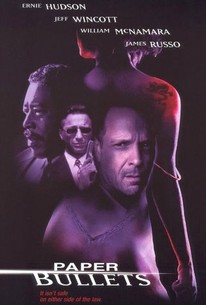 Jaded, hard-drinking, burned-out Det. John Rourke (James Russo) finds himself the target of a Los Angeles gang of Asians when he begins investigating mobster Yang (Francois Chan) and his connection to a violent, deadly attack on police during what should have been a secret meeting. Clearly, there's a mole in the force working with the mobsters. But Rourke's fate -- and future -- takes a turn for the worse when his son is taken hostage and his partner (Jeff Wincott) is discovered to be on the payroll of the bad guys. This can mean only one thing: A big shootout at an abandoned shipyard.

William McNamara
as McCoy
View All

There are no critic reviews yet for Paper Bullets. Keep checking Rotten Tomatoes for updates!

There are no featured reviews for Paper Bullets at this time.