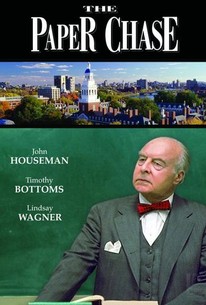 This filmization of John Jay Osborn Jr.'s novel Paper Chase ended up one of the surprise hits of the 1973-74 movie season. Timothy Bottoms stars as the Minnesotan Hart, a brilliant but naive first-year student at the Harvard Law School. Like most of his fellow aspiring attorneys, Hart is in fearful awe of his demanding, ego-deflating instructor, Professor Kingsfield (John Houseman). He is not so much intimidated by Kingsfield, however, as to resist falling in love with the professor's pretty daughter (Lindsay Wagner). An eminent theatrical and film producer, John Houseman won an Oscar for his first important film role (no, it wasn't his first film role ever; he'd played an unbilled cameo in 1964's Seven Days in May), launching Houseman on a latter-day acting career wherein he spent most of his time playing variations of Kingsfield. Houseman also recreated the role for a Paper Chase TV series, which first ran on CBS, then on public television, then on the Showtime pay cable service. ~ Hal Erickson, Rovi

Critic Reviews for The Paper Chase

A muddled and slick 'youth' film.

By the end it has melted into a blob of clichés.

Houseman is able to project subtleties of character even while appearing stiff and unrelenting; it's a performance of Academy Award quality, and resulted in an Oscar for Best Supporting Actor.

James Bridges manages to do a fair job with the semihokey material.

Back in 1926, Virginia Woolf wrote that at the movies, "as smoke pours from Vesuvius, we should be able to see thought in its wildness, in its beauty, in its oddity..." The Paper Chase fails to make thought visible.

The love-hate relationship between student and teacher are all captured with splendid accuracy.

...a fairly routine drama that never feels as though it's building to anything significant or even interesting...

The love of learning is tops in classic law school tale.

Essentially, this is a military school plot with a change of venue.

Houseman owns you whenever he's on camera.

Audience Reviews for The Paper Chase

A Harvard law student dates his imperious professor's daughter. I've thought about The Paper Chase a lot. One of my colleagues did his dissertation on educators in film, and his construct suggests that teachers are always portrayed as being exemplars of either "tough love" or "nurturing love." He contends that Kingsfield is an example of a "tough love" prof, but I argue that Kingsfield, in fact, defies his construct and is "no love." This is refreshing because I don't love my students; that means they won't make a movie about me. We argued about this for the past couple days, but it's the only interesting aspect of the film. There is a romantic story here, but the lead may be the shittiest female character ever written in film. I have no idea why she sleeps with Hart; their meeting scene is the definition of banal. I have no idea why she gets back together with him. I have no idea why she hides her identity from him; the scene in which she explains herself makes no sense. I have no idea why she does anything. She seems to pop up whenever Hart needs someone to whine to or whenever the filmmakers remember that they're paying an actress. I don't see her as a real character. Instead, she's a flat character, and you shouldn't make "Romantic Lead A" a flat character; maybe "Romantic Leads B" can be, but not A. There is also some truly banal connective tissue. There is one scene composed only of Hart getting unremarkable breakfast at an unremarkable cafeteria with an unremarkable look on his face, and this lasts for a remarkably long minute before he sits with another character and starts the story again. Overall, there is no doubt John Houseman gives a fantastic performance as the imperious Kingsfield and the characterization of the professor is good fodder for debate, but everything about the film's story construction and the banality of the characters makes this film a chore to watch.

A funny & very odd movie. This movie had a really odd ending.

Better than I remembered it to be (perhaps that's because I was 11 years old the first time?). Dated only by its score and its sense of fashion, The Paper Chase is still identifiably relevant to anyone who has ever sat in a college classroom or crammed for a final exam. Just watching it gave me test anxiety. :)