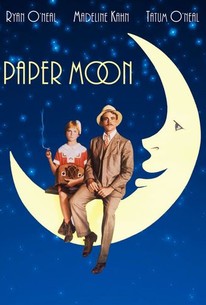 Critics Consensus: Expertly balancing tones, Paper Moon is a deft blend of film nostalgia and finely tuned performances -- especially from Tatum O'Neal, who won an Oscar for her debut.

Critics Consensus: Expertly balancing tones, Paper Moon is a deft blend of film nostalgia and finely tuned performances -- especially from Tatum O'Neal, who won an Oscar for her debut.

Critic Consensus: Expertly balancing tones, Paper Moon is a deft blend of film nostalgia and finely tuned performances -- especially from Tatum O'Neal, who won an Oscar for her debut.

A bible salesman teams up with an orphan girl to form a money-making con team in Depression-era Kansas.

Floyd Mahaney
as Beau, the Deputy

Art Ellison
as Silver Mine Gentleman

It is distinguished by its moral tone, and it is the tone that lifts it above the average flim-flam comedy.

Shot in black and white by the versatile cinematographer Laszlo Kovacs, this has a mix of folksiness and precise craft that anticipates the Coen brothers, aiming to charm and succeeding.

Part of an incredible 1970s career run for the director Peter Bogdanovich, Paper Moon remains a high point, not just for the talent involved behind the scenes and in front of the camera, but also for Hollywood.

It is very fussy about period detail, and goes to some length to evoke the dim days of Depression America, while just about everything else is left to slide.

It's everything a road picture is supposed to be, a life-changing personal journey, a quest, a bit old-fashioned and a hoot.

Of all the nice things that can be said about Paper Moon, perhaps the nicest is this: it's the first new film in a long while that's as enjoyable as it is good, and absolutely first-rate in both departments.

...grows more and more absorbing as it progresses...

[Paper Moon] is exactly what we have in mind when we talk nostalgically of what movies "used to be"--meaningful rather than metaphorical, engrossing rather than exploitative, humanistic in their comedy and their sentiment.

O'Neal leaves a continent-sized impact crater in the center of the film, delivering an instantly iconic performance none have been able to replicate.

Peter Bogdanovich, using all of the hootchie-kootchie at his command, plus Ryan O'Neal, and even more importantly, O'Neal's nine year old daughter Tatum, has made an ingratiating comedy.

Sweet, playful, reverberant - this is a perfect movie.

Tatum O'Neal delivers an Oscar quality performance, stealing every scene she's in, in Bogdanavich's nostalgic evocation of Prohibition-era Depression days as a pair of con artists move through middle American farm country. "Times might've been hard," Bogdanavich seems to imply, "but at least we were together." The best road trips are never over with. Ryan is good in this as well.

Addie Loggins: She always has to go to the bathroom. She must have a bladder the size of a peanut.  A favorite of mine will always be this nice, little road movie, Paper Moon. It was a movie that I sat down and watched years ago at a young age and I really didn't expect much from it. After 10 minutes on the road with Addie and Moze, I was having more fun than I could have thought possible. I've seen it several times since and it always leaves a lasting impression on me. It's one of those movies that you just have to watch once in awhile. It makes me feel a variety of feelings.  A con man named Moses attends the funeral of a one time "friend" and is asked to escort the dead woman's daughter, Addie, to Missouri. He reluctantly accepts and we soon learn it was just to make a quick buck off of her. When Addie finds out, she demands her money. So they begin to pull little con jobs together as they make their way to Missouri. Along the way, we see their relationship grow and there's always a sense of wonderment about whether Moze is Addie's biological father. I mean, they do have the same jaw. What makes this movie is the amazing father-daughter duo of Ryan O'Neal and Tatum O'Neal. Ryan is extremely good as the con man, but Tatum ends up taking over the show. Her performance as Addie is funny and emotional. Tatum didn't just impersonate being an actress as many child actors and actresses will do; she was one. I am under the firm belief that her performance in this film is the best performance from a child actress, or actor for that matter, ever. I'm also under the firm belief that that will never, ever change. You can hear all the praise about her performance and you can know that she won an Oscar, but until you see her onscreen; you couldn't believe it could be as amazing as it is. If you want a fun movie, a depression era movie, a road movie, a father-daughter movie, or a grifter movie; watch Paper Moon immediately. It's an under-praised, under-seen, totally under-rated classic film, that entirely too few people know about. This is easily Peter Bogdanovich's best work I've seen. Give it a chance and I can say with pretty sting conviction that won't regret it.

Father Ryan O'Neal teams up with his daughter Tatum for this comedy adventure set in the 30s. The story is good, it's fun, and very funny too. I highly recommend this movie.

Tatum swings into acting and comes out the other side to shock us all. I don't think Ryan could have played her traveling companion any better.