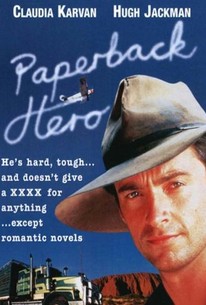 Unrequited love and mistaken identity are the lynchpins of this romantic comedy from Australia. Ruby Vale (Claudia Karvan) is a pretty but no-nonsense young woman who lives in a small village in the Aussie outback, where she runs the only diner in town. She's engaged to marry Hamish (Andrew S. Gilbert), who is pleasant but dull, and spends much of her free time with her good friend Jack (Hugh Jackman). Jack secretly aspires to be a writer and has in fact published a novel, but since the book is a frothy paperback romance, to avoid embarrassment he decided not to use his own name and instead credited Ruby Vale as the author. The book becomes a best seller and suddenly Ruby is forced to pose as the writer of a book she hasn't even read, and when the publisher flies her to Sydney to discuss her next project, confusion is the result. Leading lady Claudia Karvan was formerly a popular child actress in her native Australia, while her co-star Hugh Jackman makes his screen debut after establishing himself in musical theater, starring down under in major productions of +Beauty and the Beast and +Sunset Boulevard.

Charlie Little
as Errol
View All

There are no critic reviews yet for Paperback Hero. Keep checking Rotten Tomatoes for updates!

Typical romance, the boy has already met the girl when we are introduced to them, outback rovers both of them, she an airplane pilot and set to marry, he a truck driver surprised to discover that his secretly penned romance novel has become a success. Well now I've told everything practically and all that needs be seen is the two finding each other, which ain't too far to go as their best friends on top of all that. The real wheel this all spins on is that these characters represent Australian characters (and not those inner city brand of phonies!) so that there's an hidden nationalistic undercurrent in all these proceedings, pride in the homeland, crikey. There's some fun in the thing, but most of it is that the charm is Aussie charm. Hey look, Hugh Jackman before he went international star, too! It's nice.