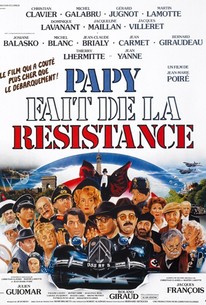 In this uneven take-off on some reluctant resistance fighters in World War II, a family of musicians find themselves the unwilling hosts of a segment of the German High Command when their Paris mansion is taken over by the occupying forces. What happens next is a series of individual skits, cameo appearances, and zany interludes that are not necessarily as strung together as they are strung out. Characters include: Adolph Hitler's melodious half-brother whose singing style is hilariously close to that of Julio Iglesias, a "good" German officer, stereotypical of any of those found in post-World War II movies, and a woman who provides the comedy in a 1970s television talk show when she expounds on what really happened in the Paris villa back when. It is the acting which carries the day for this film, more than the actual script or cinematic development. ~ Eleanor Mannikka, Rovi

There are no critic reviews yet for Papy fait de la résistance. Keep checking Rotten Tomatoes for updates!

There are no featured reviews for Papy fait de la résistance at this time.