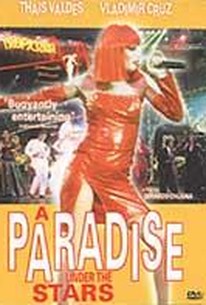 Gerardo Chijona directs this screwball comedy hailing from Cuba. Macho truck driver Candido (Enrique Molina) forbids his drop-dead gorgeous daughter Sissy (Thais Valdes) to become a dancer at Havana's hippest club, the Tropicana, though she does so anyway. On the job, Candido accidentally smashes into hunky biker Sergito (Vladimir Cruz) who has a star-shaped mole on his butt, just like Candido. Out of guilt, he brings Sergito home to recuperate. Though Sissy is more than delighted at having this injured Adonis lollygagging about the house, Candido's buddy Promedio (Litico Rodriguez) fears a potential sexual encounter. As all of this is going on, Candido's arch-nemesis Armando (Santiago Alfonso), a choreographer at the Tropicana, tries to strike vengeance by seducing Sissy. When she rebuffs the creep, she is demoted to chorus girl. As the film progresses, subplots are layered upon subplots until the film's delirious denouement. ~ Jonathan Crow, Rovi

Critic Reviews for Paradise Under the Stars

There are no critic reviews yet for Paradise Under the Stars. Keep checking Rotten Tomatoes for updates!

There are no featured reviews for Paradise Under the Stars at this time.

Paradise Under the Stars Quotes