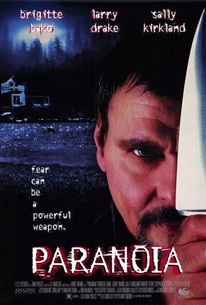 20 years ago, Jana Mercer (Brigitte Bako) witnessed the brutal murder of her entire family by a ruthless serial killer, Calvin Hawks (Larry Drake). Today, Jana has isolated herself inside an apartment that's more like a fortress than a home, with her last contact with the outside world being therapy session conducted via computer. However, one day Jana discovers Calvin has hacked his way into her computer system, and with his release from prison imminent, it's only a matter of time until he also hacks into her stronghold ... and her.

Adam Purjes
as Boy in Library

Lianna Purjes
as Girl in Library

There are no critic reviews yet for Paranoia. Keep checking Rotten Tomatoes for updates!

There are no featured reviews for Paranoia at this time.