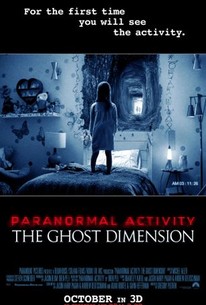 Critics Consensus: Paranormal Activity: The Ghost Dimension ties up some of the franchise's lingering questions, but six films into the series, the thrills are mostly gone.

Critics Consensus: Paranormal Activity: The Ghost Dimension ties up some of the franchise's lingering questions, but six films into the series, the thrills are mostly gone.

Critic Consensus: Paranormal Activity: The Ghost Dimension ties up some of the franchise's lingering questions, but six films into the series, the thrills are mostly gone.

PARANORMAL ACTIVITY: THE GHOST DIMENSION does what every other movie in the franchise has failed to do--tell a story.

It's sad to see a series that started with such a bang go out with such a whimper. But it's better than wringing a seventh movie from this tired old formula.

At no point does anyone say, "put down the camera, bro. You're freaking me out." When do they think they're going to watch this stuff back? "Hey, let's crack open a few beers and watch those old tapes of us watching those old tapes." I can't see it.

You've seen all this before, so much so that very little of it results in the actual jump-out-of-your-seat shocks that peppered the previous five films.

Such a tepid failure that it triggers catcalls from paying audiences.

If this is the last in the series, then the franchise has succeeded in going out with a bang - a bunch of them, actually, and at least a couple should have you involuntarily twitching in your seat.

'Paranormal Activity: The Ghost Dimension' is a mess and a complete pain in the ass in which the only debatable is what is the least bad thing of all. [Full Review in Spanish]

...stretched its one-time legitimate creepy credibility into a tired and tacky frightfest that overstayed its welcome. Basically, audiences needed another Paranormal Activity installment much like a creaky skeleton needs its share of body fat.

Taints the franchise the same way Saw 3D did five years ago...An insult to fans...who have spent seven years waiting to see how it all ends.

The plots were rehashed, with each sequel dumping bits and pieces of an extended storyline more as an excuse to develop a profitable franchise.

What began as something more (less) or less (more) original has lost its surprise... [Full review in Spanish]

See more reviews like this at chrisbreviews.blogspot.com I want to start off by saying that this movie is disappointing in every sense of the word. This is the Paranormal activity series' 6th film and is by far the worst installment. It is evident that the writers have run out of ideas this time. The plot itself has been recycled TOO MANY TIMES. The sheer boredom of this movie is unbearable, and 90 minutes was far too long. Often in the script you can see the writers killing time. There was a point in the movie where two characters were having an in depth conversation about Santa Clause and I knew that there was nothing the movie could do at that point to redeem itself. And it didn't even try. Along with that, Gregory Plotkin (who is not known for any decent work) removed all elements that made this saga engaging. The invisible entity unleashing chaos, murder, and destruction everywhere it went was a credible threat. Now with the magical camera, we can actually see the demon, and it's not a good look. It looks like some sort of black liquidy mass darting around the room not posing any legitimate threat to its victims. At parts during the film, this mass was given a hideous face that stunk of cheap CGI and was almost comedic to look at. The 'evolution' of this demon culminated at this films' conclusion. And without any spoilers what is seen is by far the most ridiculous thing and quite possibly the worst executive decision ever made in a film. Another element that was excised was the actual horror in this horror film. This movie should be rated PG-13 for no sudden jump scares, no invincible antagonists, and no reason to fear anything in this film. With a small low budget film of course comes a small low budget cast. New faces Olivia Dudley, Brittany Shaw, Don McManus, Cara Pifko, Dan Gill, Chris J. Murray, Michael Rawic and Ivy George join old faces Chloe Csengery (young Katie), Jessica Tyler Brown (young Kristi), Hallie Foote (Grandma Lois), and Aidan Lovekamp (Hunter Rey). It's almost as if there was a competition for the worst possible actor. The only incident where I felt any emotion from these characters performances was a pleading look from Brittany Shaw as the last line of defence from keeping Leila from the demon. The characters themselves were one dimensional with hardly any back story. The only genres you'll find here us flimsy attempts at horror, thriller, and comedy. No deeper meaning either, this film is one dimensional along with its characters. The final thing I want to mention is the connection to the previous films. Unlike its predecessor, The Ghost Dimension tries to relate back to the same world as the rest of the Paranormal Activity series through the tapes, an old set, and time travel. Yes, you heard me. And that wasn't the only moment where the plot turned silly... Although idiotic, the connections to the old films is at least half positive. It did expand on Katie and Kristi's intriguing story, and left me yearning for an end to their tale, for the sake of closure and cinematic quality. To conclude, I am officially saying that Paranormal Activity: The Ghost Dimension is the worst movie I have ever seen, and I've seen some garbage. Rather than thinking about negatives to bring my rating down, in this film I've grasped at straws to find shreds of affirmative elements of this monstrosity. I would only recommend this movie to those who wish to make sarcastic remarks about its terrible quality, as I did.

The Paranormal Activity franchise, which has, in my opinion, never been very good, is at its worst in "The Ghost Dimension" (or at the very least, sits on equally-worst footing alongside "PA4")

An abysmal mess, Paranormal Activity: The Ghost Dimension is a completely inept horror film. Interconnecting itself with part 3, the story follows the new owners of Katie and Kristi's childhood home (rebuilt after a fire) as they discover old VHS tapes of the kids being trained by a cult leader and an unusual video camera with unique properties that enables it to pick up different visual spectrums that show that there are entities moving throughout the house unseen by the naked eye. The film starts out alright, but within 20 minutes it's off to crazy town and doesn't let up. Nothing about it is scary or frightening in the least, and there's no investment in the characters. Paranormal Activity: The Ghost Dimension is a pathetic entry into the series, and hopefully the death knell.

Scene: two people in a dark room, one with a vidcamera filming the other. There's a noise and the camera jerks into the dark spaces. Actor voice #1: Did you hear that? Actor voice #2: Hear what? For two friggen hours. Fail.