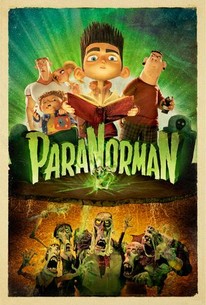 The new 3D stop-motion comedy thriller from animation company LAIKA, reteaming the company with Focus Features after the groundbreaking Academy Award-nominated Coraline. ParaNorman is, following Coraline, the company's second stop-motion animated feature to be made in 3D. In ParaNorman, a small town comes under siege by zombies. Who can it call? Only misunderstood local boy Norman (Kodi Smit-McPhee), who is able to speak with the dead. In addition to the zombies, he'll have to take on ghosts, witches and, worst, of all, grown-ups, to save his town from a centuries-old curse. But this young ghoul whisperer may find his paranormal activities pushed to their otherworldly limits. -- (C) Focus

Bernard Hill
as The Judge

3 Movies like Coco That Deal with Death and Loss from a Kid’s Perspective
Digital Multiplex: Silver Linings Playbook and ParaNorman
Parental Guidance: Men in Black III, ParaNorman, and Step Up Revolution

There's no meat on the bone of this skeleton. Witty and fast-paced, sure, but the film lacks substance.

The main plot - about combating a witch's curse - is less fun than the gothic gags on the margins.

It's an engaging entertainment, with a solidly constructed storyline.

Tweens, rather than children, will savour its snarky bite, although like the shambling on-screen cadavers, the story needed a bit more meat on its bones.

... holds up incredibly well nearly 10 years later, but Butler's script as it uses the horror tropes we've come to know, flips them, chops them up, and gives us a frequently profound exploration of the destructive power of fear.

Every child should see it.

Gorgeous animation enhances a touching story about death and learning to accept what you don't understand.

Jon Brion's original score is a perfect companion for the film with a sublime mixture of melancholy and madness along the way.

Scares blend with a strange gallows humor to create a fantastic movie that will get you as pumped up as it gets your kids.

The superb animation combines 3D stop-motion and CGI effects into a dazzling visual spectacle, but the plot drags with irregular pacing and only occasional funny jokes. The result is an average experience that ends with a clichéd message about how bullying is bad.

The animation is really original and well done, the effort that had to go into this film alone makes you want to appreciate it. Sadly, the story isn't much help after a decent start. While it is likable that the film tries to stay surprising and avoid stereotypes the plot becomes a bit of a mess in the second half. It's also surprisingly gritty and not exactly for all children. Somewhat disappointing.

From the same studio that created the delightfully creepy "Coraline" comes another family horror flick that once again boasts great stop-motion animation. Unfortunately, it's a shame to report that the rest of the film is not nearly as finely crafted in other areas. It's not like the narrative didn't contain an interesting premise, that which follows a socially awkward boy named Norman, who has the uncanny ability to talk to the dead. Norman is an immediately sympathetic figure because nobody believes in his special ability and the small town society he lives in socially and emotionally rejects him due to this, especially his parents. However, as the story picks up things become significantly less interesting (Norman's ability never ends up having any significant bearing on the plot). The two biggest problems stem from two sources: the characters and tone. The characters are in short: boring and painfully one-dimensional. Even Norman himself goes underdeveloped, almost as if the script was way more interested in giving screen time to the supporting cast. Speaking of the supporting characters, most of them are forgettable archetypes (the fat geek kid, the jock bully, the blond girl) that mostly exist to tell jokes and nothing else. This leads to the next crippling prevalent issue, a good majority of the humor in this film fall completely flat due to inept comedic timing or being lame cliché jokes that have been used in so many other past films. The whole affair also feels tonally confused, with the horror and family film elements not nearly as well balanced as they were in "Coraline". The main threat in this film consists of resurrected Puritan zombies and they never end up coming off as a foreboding threat. It's as if the writer's were more interesting in the visual gag possibilities of the zombies rather than establishing them as a credible threat (Heck, it seemed like even without Norman the zombies would have been easily defeated by the town's people). On one end, kids may get a kick at some of the jokes but meanwhile adults will most likely be bored with the overly simplistic drawn-out narrative and half-baked horror elements. Once again, it's not like the film was completely unsalvageable. There is a third-act plot twist that is actually legitimately heart-breaking and leads to by far the best scene in the entire movie (at least the most emotionally charged section that was thankfully devoid of forced jokes). It also leads to an admirable life lesson about accepting others and dashes of slightly daring social commentary (at least, for a kids film) regarding society's treatment of outsiders. It's just a shame that the sequence came so late into the film because it only served as a reminder for it's wasted potential. In the end, "Paranorman" serves as an example of a good idea that was terribly executed. Great animation and an interesting premise are buried six feet under a crappy narrative, awful pacing, poorly written humor, and jarring tonal inconsistencies.

This has to be one of the most surprising, awe inspiring, and beautiful films of the year, and on top of that it's a children's film. Laika, a new studio on the scene, made this film in a revolutionary style, akin to "Coraline," but in 3D. The studio took a chance on a very quirky and independent kind of film, and it's these studios that are bringing out newer and better concepts for children's faire. Not only is this film morbid, but it's also revolutionary when it comes to its characters. Maybe some of the templates are still there, but the characters themselves are completely different, and certainly entertaining. Our hero Norman (Smit-McPhee) is odd of course while also having a supernatural power, which makes him even odder and plainly different than the antagonizing children around him. Really, the kids in this film are overtly mean, and though it's a bit over the top it is realistic. Norman is interested in zombies and death, because he speaks to the dead, and while this is set up very ingeniously, it's also swift for us to realize that this kid isn't normal Norman. The other supporting characters seem as usual as you get in a kid's film, but there are some surprises. The pudgy kid who gets all the laughs is much more sincere than the usual slack-jawed numb nuts stereotype. The typical jock gets a major upgrade and changed the face of children's movies, maybe forever. The visuals in this are as amazing as you would expect from stop motion puppetry through computer animation. Besides the characters being weird, so are the settings, the zombies, and the villain is the most impressive witch to be featured in a children's film in years. Besides being a strange alternative for most kids it also has a great message and goes against bullying, which is always good. This is one of the best films to show a child, especially those that are strange themselves.