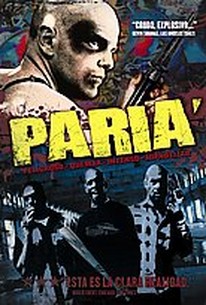 His life permanently destroyed in one senseless act of violence, one man abandons everything he ever knew in order to seek vengeance against a vicious gang of racist skinheads. Steve (Damon Jones) and Sam (Elexa Williams) were an interracial couple just minding their own business when they were suddenly beset by Neo-Nazi Skinheads. In an instant, the couple was brutalized to the point of near death. While the physical scars would heal over time, Sam's psychic wounds run too deep to bear, and she eventually commits suicide. In the aftermath of that tragedy, Steve vows never to rest until Sam's death has been avenged. But by the time Steve prepares to actually pull the trigger on his attacker, has he already become what he once set out to destroy?

There are no critic reviews yet for Paria. Keep checking Rotten Tomatoes for updates!

There are no featured reviews for Paria at this time.