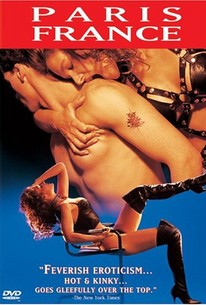 Lucy, a writer of erotic novels who is uninspired unless she gets some new sexual experience, plunges into a torrid affair with Sloan, an arrogant bisexual, who has written a novel about a serial killer and whom Lucy's husband, a publisher, has introduced to her. Lucy either fantasizes or recalls a sultry affair that she had once in Paris with a hood named Minter, who introduced her to the ultimate in sexual satisfaction. Lucy's husband discovers his latent homosexuality, guided by his business associate William, who also has an affair with the sexually indiscriminate Sloan. This pretentious, would-be artsy film combines black-and-white and color sequences but ultimately is derivative and boring. ~ Yuri German, Rovi

There are no critic reviews yet for Paris France. Keep checking Rotten Tomatoes for updates!

There are no featured reviews for Paris France at this time.