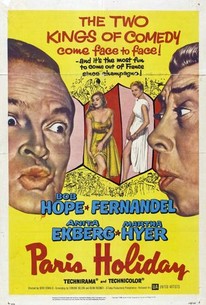 Two of filmdom's finest farceurs--Hollywood's Bob Hope and France's Fernandel--are teamed in the location-filmed Paris Holiday. Since Hope coauthored the script, however, guess which actor has the largest part. Cast more or less as himself, Hope plays an American comedian who comes to Paris to purchase a script. Little does his suspect that the script contains secret messages pertaining to a vicious gang of counterfeiters. With the help of villainess-turned-heroine Anita Ekberg, Hope is committed to an insane asylum to protect him from the bad guys; he then must rely upon Fernandel to spring him from the looney bin. Throughout Paris Holiday, Bob Hope looks too old and too rich to be indulging in such nonsense. Film buffs will enjoy the brief, unbilled appearance by famed producer-director-writer Preston Sturges.

Hope and Fernandel (clearly playing second fiddle to his Yankee counterpart) are both pleasant but don't conjure up any screen magic together.

[Hope & Fernandel's] comedic styles never meld particularly well; Hope being quick with the wisecrack, while Fernandel is left to clownish mugging. There are far better showcases out there for both of their talents.

Austin Trunick
Under the Radar
View All Critic Reviews (2)

I am sorry Bob, but this is just a trainwreck. A script that is practically non-existent, no humour or jokes apart from your usual super-sexual innuendos and a co-lead that does not speak English but is not subtitled ? Seriously ? Could not finish this one. Boy, what a turkey.