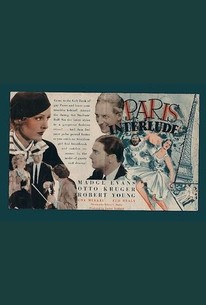 In director Edwin L. Marin's film Paris Interlude, a beautiful French woman named Julie Bell (Madge Evans) unexpectedly falls in love with Sam Colt (Otto Kruger, a vulgar American news journalist. Based on (All Good Americans), a play by Laura and S.J. Perelman , Sam spends most of his time in Paris drinking beer and consorting with his fellow American colleagues. Meanwhile, rookie reporter Pat Wells (Robert Young) also has eyes for Julie (Evans), and tries to persuade her to marry him after hearing that Sam (Kruger) was likely killed in his trip to China. After much debate, Julie finally agrees. Unfortunately for Pat, it turns out that Sam had not been killed after all. On the night of Julie and Pat's wedding party, Sam drunkenly approaches Julie and proposes, though he collapses before he could hear her answer. Julie remains undecided until Sam himself, in a rare moment of personal honor, tells her she belongs with the younger journalist. (Paris Interlude) also includes actors Ted Healy and Una Merkel.

Rolfe Sedan
as Waiter
View All

There are no critic reviews yet for Paris Interlude. Keep checking Rotten Tomatoes for updates!

There are no featured audience reviews yet. Click the link below to see what others say about Paris Interlude!