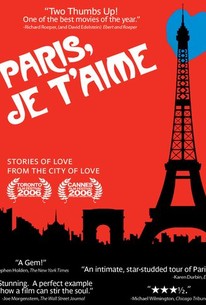 Critics Consensus: Paris Je T'aime is uneven, but there are more than enough delightful moments in this omnibus tribute to the City of Lights to tip the scale in its favor.

Critics Consensus: Paris Je T'aime is uneven, but there are more than enough delightful moments in this omnibus tribute to the City of Lights to tip the scale in its favor.

Critic Consensus: Paris Je T'aime is uneven, but there are more than enough delightful moments in this omnibus tribute to the City of Lights to tip the scale in its favor.

Twenty acclaimed filmmakers from around the world look at love in the City of Lights in this omnibus feature. Paris, Je T'Aime features 18 short stories, each set in a different part of Paris and each featuring a different cast and director (two segments were produced by two filmmakers in collaboration). In "Faubourg Saint-Denis," Tom Tykwer directs Natalie Portman as an American actress who is the object of affection for a blind student (Melchior Belson). Christopher Doyle's "Porte de Choisy" follows a salesman (Barbet Schroeder) as he tries to pitch beauty aids in Chinatown. Nick Nolte and Ludivine Sagnier are father and daughter in "Parc Monceau" from Alfonso Cuarón. Animator Sylvain Chomet turns his eye to a pair of living, breathing mimes in "Tour Eiffel." An interracial romance in France is offered by Gurinder Chadha in "Quais de Seine." In "Le Marais" from Gus Van Sant, a man (Gaspard Ulliel) finds himself falling for a handsome gent (Elias McConnell) who works in a print shop. Isabel Coixet tells the tale of a man (Sergio Castellitto) who is making his final choice between his wife (Miranda Richardson) and his lover (Leonor Watling) in "Bastille." Juliette Binoche plays a grieving mother in Nobuhiro Suwa's "Place des Victoires," in which she's greeted by a spectral cowboy (Willem Dafoe). Richard LaGravanese's "Pigalle" finds a long-married man (Bob Hoskins) turning to a prostitute for advice on pleasing his wife (Fanny Ardant). Gérard Depardieu and Frédéric Auburtin direct Gena Rowlands and Ben Gazzara as longtime marrieds meeting for one final pre-divorce encounter in "Quartier Latin." Steve Buscemi learns a lesson about local etiquette in the Paris Metro in "Tuileries" from Joel and Ethan Coen. In "Loin du 16ème" by Walter Salles, a housekeeper (Catalina Sandino Moreno) longs for her own child as she tends to the infant of her wealthy employer. Elijah Wood stars in "Quartier de la Madeleine," a vampire tale from Vincenzo Natali. Wes Craven presents another fantasy in "Père-Lachaise," in which an engaged young man (Rufus Sewell) receives romantic advice from the spirit of Oscar Wilde (Alex Payne). A postal worker from Colorado (Margo Martindale) shares her thoughts on her visit to Paris in mangled French in Alexander Payne's witty "14th Arrondissement." Other segments include "Place des Fêtes" from Oliver Schmitz, Bruno Podalydès' "Montmartre," and "Quartier des Enfants Rouges" by Olivier Assayas, which stars Maggie Gyllenhaal. Paris, Je T'Aime received its world premiere at the 2006 Cannes Film Festival.

Steve Buscemi
as The Tourist

Sergio Castellitto
as The Husband

Willem Dafoe
as The Cowboy

Miranda Richardson
as The Wife

Elijah Wood
as The Tourist

Javier Cámara
as The Doctor

Hippolyte Girardot
as The Father

Olga Kurylenko
as The Vampire
View All

A connoisseur's delight: two hours of short films celebrating the most romantic city in the world.

Taken as a whole, Paris Je T'Aime slips down easily enough and offers a few whimsical smiles, but you may find yourself craving more substantial nourishment before the end.

You expect quality to vary from segment to segment, but the misses outweigh the hits by a depressingly high margin.

A slam-dunk for cineastes, romantics, and Francophiles.

For directors and actors who usually work on projects that take years to develop and months to film, this must have been a really fun lark. For the viewer, it's a full cinematic feast.

A little uneven in style, tone and quality. But the picture that emerges of Paris is romantic, cosmopolitan and hopeful.

Paris Je T'aime is a bit of a fiasco. Boasting an obviously large budget -- judging by the sharp production values and international cast -- the film does little to capture the magic of Paris, and rather comes off as a pretentious bore.

A wonderful film - it is a vibrant, shimmering love letter to Paris that warms the heart in ways that few films can.

The most resonant moments in Paris, Je T'Aime happen to be the bleakest, and they're about immigrants and other outsiders.

Alluring, all in all, and unfulfilling

Considering just how many cooks there were in the kitchen, Paris, je t'aime came out with a pretty even feeling

I thought that Paris Je t'aime was an overrated film that really didn't deserve the praise it has received. I appreciate the artistic merit that the filmmakers tried to accomplish with this film; however the end result is simply a film that lacks any true engaging elements to really make it stand out. The film is mediocre and doesn't satisfy the way it should. I thought the idea behind the film was good, but something simply didn't click. The films various directors and stellar cast can't even save this one from being a dud. This film was a good try at doing something different, but it just wasn't to my liking. I felt that they could have done a lot more with this film, and it leaves a lot to be desired. The idea behind this anthology is interesting, but it really does lack something to really make it stand out. The film has an established cast of very good actors, but they seem unimpressive on-screen. You'd think that a film involving several high profile actors would bring something to the screen that would make the film stand out. Unfortunately, the film falls flat and is an uninteresting effort by some great directors. I for one, don't get the hype surrounding this film, and I thought it was mediocre this film could have been great; unfortunately it wasn't that great with too many imperfections. If each director would have put a bit more effort into the film, then maybe this film would have stood out.

Its fun to watch and shows the talent of multiple directors!

It's bumpy at times, with some great shorts and some not so great ones. But it's strength lies in the film as a whole, and all-in-all it was well done.

Anthology of short films from 22 directors (mostly French), all set in Paris and revolving around the theme of love. It's definitely a "box of chocolates" experience---many of the stories are yawners, maudlin, or inconclusive---but there are enough good ones to make it worth a watch. The Coen Brothers segment, a hilarious sketch starring Steve Buscemi demonstrating why you should never look someone directly in the eyes on the Paris Metro, is the best. Other memorable pieces are a silent vampire story (starring Elijah Wood) and the almost heartbreaking story of a dying Nigerian immigrant who wants a coffee date with the cute paramedic who comes to his aid.