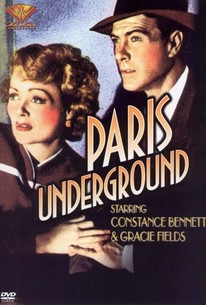 Constance Bennett both produced and starred in the espionager Paris Underground. Bennett and Gracie Fields play, respectively, an American and an English citizen trapped in Paris when the Nazis invade. The women team up to help Allied aviators escape from the occupied city into Free French territory. The screenplay was based on the true wartime activities of Etta Shiber, who engineered the escape of nearly 300 Allied pilots. British fans of comedienne Gracie Fields were put off by the scenes in which she is tortured by the Gestapo, while Constance Bennett's following had been rapidly dwindling since the 1930s; as a result, the heartfelt but tiresome Paris Underground failed to make a dent at the box-office. It would be Constance Bennett's last starring film--and Gracie Fields' last film, period.

Dina Smyrnova
as The Marquise

There are no critic reviews yet for Paris Underground. Keep checking Rotten Tomatoes for updates!

There are no featured audience reviews yet. Click the link below to see what others say about Paris Underground!