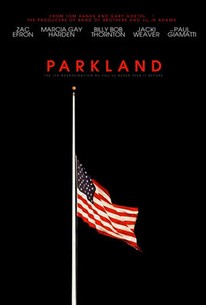 Critics Consensus: Although its decision to look at John F. Kennedy's assassination through uncommon perspectives is refreshing, Parkland never achieves the narrative cohesion its subject deserves.

Critics Consensus: Although its decision to look at John F. Kennedy's assassination through uncommon perspectives is refreshing, Parkland never achieves the narrative cohesion its subject deserves.

Critic Consensus: Although its decision to look at John F. Kennedy's assassination through uncommon perspectives is refreshing, Parkland never achieves the narrative cohesion its subject deserves.

PARKLAND recounts the chaotic events that occurred in Dallas, Texas on November 22, 1963, the day President John F. Kennedy was assassinated. Written and directed by Peter Landesman and produced by Playtone partners Tom Hanks and Gary Goetzman, Bill Paxton and Exclusive Media's Nigel Sinclair and Matt Jackson, PARKLAND is the ferocious, heart-stopping and powerful true story never told of the people behind the scenes of one of the most scrutinized events in history. (c) Exclusive Releasing

Sean McGraw
as Lydon B. Johnson

Had Landesman spent a bit more time on his characters and narrative, he might have made a more watchable movie.

The revelations are unshowy, the emotional clout is stealthy, and JFKologists can rest easy knowing that the project neither engages with nor contradicts their pet preoccupations.

Parkland remains a bystander in the already overcrowded field of films about the events of November 1963.

It's slick and well acted (by Paul Giamatti, Zac Efron and Billy Bob Thornton, among others), but this attempt to make new sense of the death of JFK feels staggeringly pointless.

It's a heartfelt, modest and well staged film about the Kennedy assassination ...

The monumental hand-wringing about Kennedy feels, the further we get away from the event, somehow inappropriate.

The film finds its strength in the quintet of lesser known players, especially Zapruder and, oddly enough, Oswald's stoic brother, who's cast in a heroic, almost Kennedy-esque, light.

What might have made a terrific television series is instead a mediocre - if historically interesting - film.

Chris Davies
One Room With A View

Parkland is little more than the audible whimper of a people ruminating over a great tragedy.

The acting, by stars such as Zac Efron, Paul Giamatti, Billy Bob Thornton and James Badge Dale, is low-key and magnificent.

The performances are powerful, the authenticity is admirable, and the tone remains objective in its depiction of events throughout.

A ( ... ) pragmatic, four-day, fly-on-the-wall view of Dallas when the 20th Century's most documented death arguably facilitated the birth of 24-hour rolling news, citizen journalism and You Tube.

Based on Vincent Bugliosi's book, Four Days in November, the film Parkland chronicles the events following the assassination of JFK. What I liked about this film was how it tells a part of the story that isn't widely known. From the doctors at the hospital, working on the President, to the acquisition of the Zapruder film, Parkland goes behind the scenes to tell the untold story. I was also impressed with how the film managed to stick to the facts and not dwell on any of the conspiracy theories that surround the case. Zac Efron stars and really wasn't all that great. I think that Efron needs to stick to what he does best, taking his cloths off and making people laugh. While the film is kind of slow, I really enjoyed Paul Giamatti's portrayal of Abraham Zapruder, the man who filmed the assassination. Zapruder really struggled with releasing the tape to the media and the events he witnessed ultimately destroyed his life. Giamatti's portrayal of the man is supposedly spot on and truly deserves an honor mention. Parkland gives us a lot of new information about the events that followed the assassination of President Kennedy, but a lot of it are things the general public really aren't that interested in learning about. For a Kennedy aficionado, this film must of been eye opening, as for the rest of us, it was an interesting, non-bias view of history, albeit a little boring.

Based on the book from Vincent Bugliosi. A really great writer, by the way. This story was very insightful. It depicts all that happened following the shooting of President Kennedy, and the actions that the Secret Service took that led to many of the conspiracy theories still around today. Great, solid performances caused me to get emotional at times. I thought Paul Giamatti stood above the rest with his great portrayal, and acting. I didn't realize until the end that Tom Hanks, and Bill Paxton, were producers on this film. Nice job done by all!

I left feeling unsure about what the goal of this movie was. I've seen better documentaries on TV which went much more in depth with the material. Yet being a factual reenactment, they couldn't exactly give much in the way of twists either; the viewer already knows what's going to happen. So it's either a kind of shallow documentary or the world's most predictable drama. As other reviewers have noted, the film tries to follow several different individuals and does a pretty poor job developing any of them to a meaningful extent. It starts pretty much out of the gate with the big event, so we don't learn anyone's background, nor does it follow them more than a few days beyond the tragedy. So again, all extremely predictable to anyone who has read a book or watched a decent documentary on the topic. 2 Stars. 12-10-13

Following the assassination of John F. Kennedy, he was brought to Parkland Hospital, and this film is tells the story of what Happened on November 22, 1963 and its subsequent aftermath. Considering the subject, Parkland could have been a standout drama. However as it is, it's an average movie, and though I liked it, I also felt something was missing to really make it standout. Some of the cast were good, and the performances were engaging and captivating, but the film also has a short run time, for which the filmmakers seem to try to crame way too much in a 90 minute film. If the film had been two hours and the script with have been tweaked a bit, and then Parkland might have been a great film, but as it stands it's a good movie that never reaches its full potential. If you're interested in what happened after JFK's assassination, then Parkland might give you an insight, but it never is truly accurate or exposes new information on what happened. Even with all of that being said, Parkland still manages to grab your attention, but if you want to know more about the facts, read up on it, and watch plenty of documentaries because, this film is never a portrait of accuracy, and it seems that the filmmakers focused more on making a short picture that should have been made into a two hour film to really make it something engaging. Here we get that feeling, as the assassination part of the President is pulse poundingly shocking and riveting, because it was a dark part of history, one that still resonates to this day. Parkland is a good movie, unfortunately it does boast a few shortcomings, which makes this an average drama, and it's a shame because its subject is truly captivating.