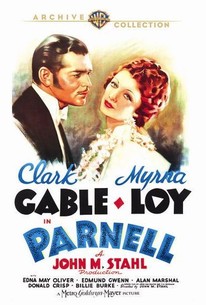 The true story of one of Ireland's leading political figures of the late 19th Century inspired this biographical drama. Charles Stewart Parnell (Clark Gable) is a politician and activist whose tireless work towards the cause of Irish independence has earned him the nickname "the Uncrowned King of Ireland." After a fund-raising trip to the United States, Parnell is introduced to Katie O'Shea (Myrna Loy), whose husband Willie O'Shea (Alan Marshall) is running for Parliament. In truth, Katie and Willie's marriage is on its last leg; she despises him, but he refuses to give her a divorce, in part because Katie's wealthy Aunt Bea (Edna Mae Oliver) is willing to pay him to keep his distance. Willie hopes that a friendship between Katie and Parnell could be a stepping stone towards an endorsement from Parnell -- which, given his popularity, would make a massive difference in the polls. However, as Parnell continues to rally support for a free Ireland, he finds he's fallen in love with Katie, and she is also strongly attracted to him. When Willie learns of their romance, he makes a devious proposal to Parnell -- with an independent Irish state seemingly imminent, and with Parnell the likely leader, Willie demands a high office within his administration, or otherwise he'll tell the world about Parnell's affair with a married woman, which could end his career and set the cause of Irish freedom to a halt. Parnell was an infamous box-office disappointment in its day, and Gable's significant other Carole Lombard was said to have loved teasing him about the film; it's failure led Gable to pledge he'd never make another costume picture, though he later relented when Gone With The Wind came along.

Berton Churchill
as The O'Gormon Mahon

There are no featured reviews for Parnell at this time.