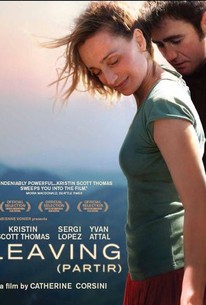 A riveting new drama by the prolific French filmmaker Catherine Corsini, LEAVING (PARTIR) stars Oscar-nominee Kristin Scott Thomas as a woman prepared to abandon everything in pursuit of passion. A success with critics and audiences alike at the Toronto and Seattle film festivals, this elegantly told tale of intrigue is not to be missed. Kristin Scott Thomas is Suzanne, the bourgeois wife of a successful doctor, Samuel (Yvan Attal), living together with their children in the south of France. Weighted down by a thrill-less lifestyle and a stale marriage, Suzanne falls for the handsome young Ivan (Sergi López), an immigrant ex-con working on their property. Their affair is passionate, but Suzanne is wracked by guilt. When she confesses to her husband, his retaliation begins an ugly turn of events. -- (C) IFC

Alexandre Vidal
as David
View All

Critics Consensus: The Social Network Is One Of The Year’s Best

Peculiarly powerful, as well as sun-drenched, which always helps.

A heady, pertinent cocktail of love, mid-life crisis, and domestic abuse among the bourgeoisie, Catherine Corsini's classy, cerebral soap can feel a little schematic. Happily, KST is on hand with thespian superpowers to save the day.

Leaving tells the kind of painful story -- of passion, betrayal, revenge -- we might read about every day in the papers, but it is the cool manner of its telling and an outstanding central performance by Kristin Scott Thomas that sharpen our interest.

Even for the routinely terrific Kristin Scott Thomas, the infidelity-themed Leaving is a top-drawer thesping workout.

This alternation between frenzy and calm is the key to Corsini's aesthetic, a strategy the director employs in order to both introduce a modest tension into her otherwise tired material.

If Leaving is a romantic parable, it is a dark and depressing one, emphasizing not the sensuality of attraction but rather the obsessive side of romantic behavior. This is mad love for sure, and that is not usually a pretty picture.

Corsini tries to take an even-handed approach to each character by showing how confusion leads to selfishness, but nothing new is added to this predictable genre.

With a terrific central performance from Kristin Scott Thomas, Leaving is a thoroughly gripping emotional drama that plays like a sun-drenched film noir.

The fact that her children have their lives upended by their mother's yearning for Lopez's low-born, bad-boy loser makes matters both worse and more idiotic than plausible.

[Thomas] remains a mesmerizing mix of carnality and class, and through richer and poorer, she keeps director/co-writer Catherine Corsini's bourgeois fantasy from overheating.

Between the terrific performances and artful cinematography, this is one high-class piece of melodramatic crap.

Thomas, bless her, remains compelling throughout. But it gets harder and harder to watch the things "Leaving" forces her to do.

I don't quite understand the hate that this film got from users and critics alike. Kristin Scott Thomas has landed in a number of French dramas and this is her best performance. The entire cast actually is excellent at keeping the tension level appropriate leading to a thrilling end.

Really good!! My take on what happens after the movie: Suzanne gets a good lawyer and recuperates in a mental hospital because she was raped and driven temporarily insane. The lovers get back together, restore the rock house and live happily ever after. Maybe they could make a sequel, and call it, "Coming". --copied from another reviewer, but I thought it was so great that I had to put it here. :)

One of several European films I've seen this year that has what is essentially a very ordinary story but that is made with such conviction and power that I was left dumbstruck at the end. Leaving unusually has our lead confessing her affair to her husband very early on and the route it takes - the result of that affair - is what propels the story. Admittedly, not a whole lot in terms of plot actually happens until the bleak and very effective final third, but what a final third, with Kristn Scott Thomas simply brilliant as Suzanne. The critic Mark Kermode was right when he said she does "staring into the void" very well; when her happiness is taken away it is written all over her face. Uncomfortable viewing that has stayed with me, but cinema par excellence.

Unconvincing tale of infidelity from a 'middle-aged' female's perspective which has original elements but I didn't believe the women's choices even given 'armour fou'.