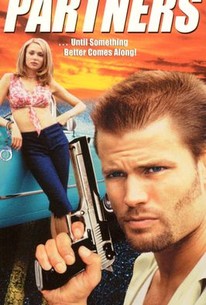 A white-collar criminal meets a blue-collar small-time crook who thinks he's stumbled into a major score in this crime comedy. Bob (David Paymer) is a slightly geeky computer programmer who decides to turn on his boss and make a big killing. He steals a highly valuable set of computer codes from his workplace and offers to sell them to their competitors. Bob's plan seems to be working out fine, until he makes the mistake of discussing his plan on a bus within earshot of a drifter (Casper Van Dien) who overhears that Bob expects a seven-figure payday for the data. The drifter lifts the briefcase with Bob's stolen goods, and Bob discovers he now has a partner in crime. Bob has little choice but to play along, though his lack of enthusiasm becomes acute when the drifter's former girlfriend, a pair of Japanese agents, a detective, and several other hangers-on are all hot on their trail. Partners also features Vanessa Angel, Seiko Matsuda, Jennifer Lewis, and Donna Pescow.

Yuji Okumoto
as One Eye

There are no critic reviews yet for Partners. Keep checking Rotten Tomatoes for updates!

There are no featured reviews for Partners at this time.