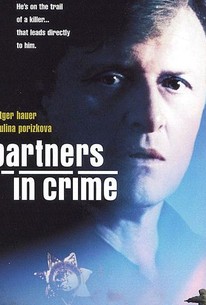 In this action drama, Rutger Hauer plays Gene Reardon, a detective working in a small town who is put on the case when a major kidnapping erupts. The FBI is brought in, and Reardon finds himself working under a top federal agent, Wallis Longsworth (Paulina Porizkova) -- who used to be his wife. Evidence begins to suggest that Reardon may be involved in the crime himself, which he adamantly denies. When the kidnapping turns into a murder, Longsworth teams up with Reardon to help him prove his innocence and track down the real culprit. Partners in Crime also stars Andrew Dolin and Frank Gerrish; Jennifer Warren directed.

Critic Reviews for Partners in Crime

There are no critic reviews yet for Partners in Crime. Keep checking Rotten Tomatoes for updates!

There are no featured reviews for Partners in Crime at this time.