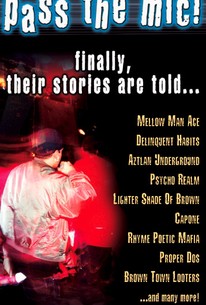 While hip-hop is widely perceived as an African-American community, the truth is the Hispanic American community has long played a vital part in the rap music scene, and this documentary offers a look at the past, present and future of the Latin Hip-Hop phenomenon and some of the prime movers and shakers in rap from the barrio. Pass The Mic! includes performance footage and interviews with a number of pioneering artists, including Mellow Man Ace, Proper Dos, Delinquent Habits, Capone, Lighter Shade of Brown, and many more.

Critic Reviews for Pass the Mic

There are no critic reviews yet for Pass the Mic. Keep checking Rotten Tomatoes for updates!

There are no featured reviews for Pass the Mic at this time.