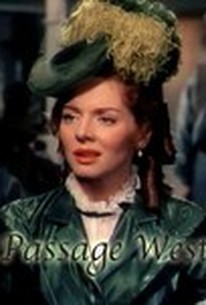 Somewhat similar to John Ford's Wagon Master (1950), Passage West deals with a band of religious pioneers, led by a peace-loving minister (Dennis O'Keefe), heading across the desert. Along the trail, the travellers are forced to accompany with six escaped convicts who join the wagon train. The criminals range from basically decent to homicidal, resulting in fluctuating tensions throughout the westward trek. John Payne, one of the more compassionate convicts, is further humanized by his affection for leading lady Arleen Whelan. Passage West was a B-plus production from Paramount's prolific Pine-Thomas unit. The screenplay was cowritten by Nedrick Young, just before his career was retarded by the Hollywood Blacklist. ~ Hal Erickson, Rovi

There are no critic reviews yet for Passage West. Keep checking Rotten Tomatoes for updates!

Saw this one some time ago, its a old western that slipped under the radar, About a wagon train heading west which is taken over by 6 escaped outlaws, ruthless devils, but our leading lady knows how to tame the toughest one. 4 Stars