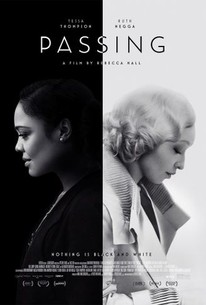 Critics Consensus: While Passing's delicate approach has a dampening effect on its story, debuting director Rebecca Hall makes the most of an impressive cast -- and handles thorny themes with impressive dexterity.

Critics Consensus: While Passing's delicate approach has a dampening effect on its story, debuting director Rebecca Hall makes the most of an impressive cast -- and handles thorny themes with impressive dexterity.

Critic Consensus: While Passing's delicate approach has a dampening effect on its story, debuting director Rebecca Hall makes the most of an impressive cast -- and handles thorny themes with impressive dexterity.

"Based on the novella of the same name by Nella Larsen, this film--directed and written for the screen by Rebecca Hall--is set in late 1920s America. It follows childhood friends Irene, known as 'Reeny' (Tessa Thompson), and Clare (Ruth Negga) as they meet again as adults. Reeny married a doctor (André Holland) and Clare married a businessman (Alexander Skarsgård) with racist tendencies. But meeting again leads to complications that threaten their new identities and lives in ways they could never imagine. Co-starring Bill Camp and Gbenga Akinnagbe. "

The 10 Buzziest Titles at the 2021 Sundance Film Festival

Passing is one of the must-see films of 2021, one that will stay in your mind well after the credits have begun to roll.

Much of "Passing" could be a stage play: people talking in confined spaces, the confinement figurative as well as literal. It's a chamber drama bearing the weight of several centuries.

Hall breathes life and light into it in a way that lends a weight of beauty and honesty to its immersion into a world of purposeful pretense.

This film is nothing short of masterful.

Negga is altogether extraordinary, a sort of human mirage of aspirational perfection and psychological delusion, shimmering with warmth and mischief and sex.

Everything about this astonishing, just-plain-satisfying film feels like a revelation. Bone-deep subversive yet universal, dripping with a quiet dread yet also beautiful and beautifully wise.

In an efficient 98 minutes, the film keeps upping the ante, adding variations to the same theme in order to show that we all pretend at times to be what we are not...

An achingly tender portrait of duality.

A talented cast and steady direction from Rebecca Hall bring a cinematic vibrancy to this fictional story from the 1920s, but it's a story that applies to many people's lives in the past, present, and future.

There are no featured reviews for Passing at this time.