Passion in the Desert1997 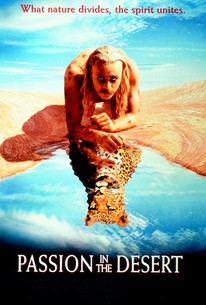 Passion in the Desert Photos

First time director Lavina Currier utilizes the stark beauty of the Jordan and Utah deserts to create a gorgeous backdrop (filmed by noted Russian cinematographer Alexei Rodionov) for her haunting, richly textured adaptation of Balzac's rumination on human nature versus the natural world -- set in 1798 Egypt during the time when Napoleon launched an ill-fated campaign upon the country. Augustin Robert (Ben Daniels) is a young officer who has been commissioned by Napoleon to accompany the painter Jean-Michel Venture de Paradis to create detailed renderings of the ancient desert monuments before the rapacious French soldiers destroy them. The two are travelling with a regiment until they are separated by an ambush of Mamulke warriors. Together, they brave heat, lack of water and terrible sandstorms until the desperate painter commits suicide and leaves the tattered and nearly dead Augustin alone. Eventually, Augustin wanders into a deep canyon and finds himself surrounded by ancient ruins. He finds himself facing a leopard, but the creature does not kill him. Instead the two gradually become friends, with the great cat showing Augustin a water source. The leopard even shares its kills with the soldier, and as time passes Augustin becomes as wild and uncivilized as his spotted companion whom he names Simoom (meaning breath of the desert). They communicate via gesture and become quite close until Augustin finds himself faced once again with the lure of civilization, an irresistible force that leads to a tragedy. In keeping with the theme of becoming one with nature, the film contains little dialog, choosing instead to focus upon the majesty of Augustin's new world.

Critic Reviews for Passion in the Desert

Part an adventurous love story between a man and a leopard, part a metaphysical meditation about the mysteries of Nature, Lavinia Currier's feature directorial debut is dramatically inert but visually striking.

Passion in the Desert is a brave folly of a film, easy to laugh at but deserving a certain respect, if only because it involves such a foolish and difficult story.

An impressive feature film debut for filmmaker Lavinia Currier. With the exception of one scene that crosses the line, her work here shows intelligence, sensitivity, artistry, and courage.

A shameless art movie about a man falling in love with a wild leopard; that takes guts.

A beautiful film brimming with breathtaking scenes of danger, wonder and the communion between man and beast.

While Currier's film is beautifully photographed, it's so far-fetched and so anachronistic, without the benefit of an overriding vision, that it simply ends up being monotonous.

When Robert sheds his clothes and begins to paint himself like his feline love, I was singing in my head 'Everybody Wants to Be a Cat.'

Audience Reviews for Passion in the Desert

There are no featured audience reviews yet. Click the link below to see what others say about Passion in the Desert!

Passion in the Desert Quotes