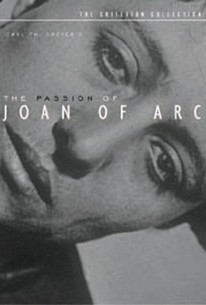 Critics Consensus: The Passion of Joan of Arc is must-see cinema for Renée Maria Falconetti's incredible performance alone -- and an all-time classic for innumerable other reasons.

Critics Consensus: The Passion of Joan of Arc is must-see cinema for Renée Maria Falconetti's incredible performance alone -- and an all-time classic for innumerable other reasons.

Critic Consensus: The Passion of Joan of Arc is must-see cinema for Renée Maria Falconetti's incredible performance alone -- and an all-time classic for innumerable other reasons.

With its stunning camera work and striking compositions, Carl Th. Dreyer's The Passion of Joan of Arc convinced the world that movies could be art. Renée Falconetti gives one of the greatest performances ever recorded on film as the young maiden who died for God and France. Long thought to have been lost to fire, the original version was miraculously found in perfect condition in 1981 in a Norwegian mental institution.

Maria Falconetti
as Joan of Arc

Henri Maillard
as Judge
View All

The composition of the pictures is extremely beautiful, and the deliberation of the movement allows time for their beauty, and the poignancy of Mlle. Falconetti's acting, to produce a cumulative effect.

This is neither a hopeful nor a hopeless film, but one of feeling so colossal and resplendent, it can't be constrained by prison or consumed by fire.

In the hands of the great Danish director Carl Theodor Dreyer it becomes a potent saga of battered faith, vicious bullying and personal torment.

Here is a deadly tiresome picture that merely makes an attempt to narrate without sound or dialog an allegedly written recorded trial in the 15th or 16th century of Joan of Arc for witchery, leading to her condemnation and burning at the stake.

Dreyer's radical approach to constructing space and the slow intensity of his mobile style make this "difficult" in the sense that, like all the greatest films, it reinvents the world from the ground up.

One of the most inspired and inspiring films ever made.

The film makes for an intimately unsettling watch, as Dreyer's style of shooting (harsh angles to go along with all those up-close-and-personal visages) traps the viewer as much as the players.

I was really impressed by the camerawork in the film.

With Einhorn's accompaniment, these pieces lift and spin heavenward on the voices of the choir. I've never seen or felt anything quite like it.

Director Carl Dreyer establishes himself as a master of the camera, and uncovers a directorial treatment that is entirely original and unique.

The showing of close-ups is used as a means of unfolding the tale, which depicts the last six hours of Joan's life, her trial and death. The lack of story and essential support leaves most of the work to Mlle. Falconetti, and she handles it admirably.

The Passion of Joan of Arc is nothing without that face. Falconetti's features are both youthful and weathered; her expressions are tortured but joyous. It's a spectacular performance.

Baffling us with spectacular visuals and one of the most magnificent performances in the history of Cinema, it is nearly unbelievable how Dreyer made such a stunning masterpiece solely from rejected material after his original master print had been accidentally destroyed.

Very simple and minimalistic, yet very compelling and harrowing. What I found intriguing - and a bit bizarre, knowing how meticulous Dreyer could be - was that single shot where one of the priests was clearly seen wearing 20th century glasses. Why would he have left it in? Was it a reference to someone?

With breathtaking visuals and a potent story, it's hard to believe this was released in 1928.