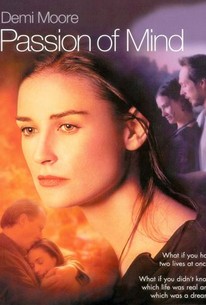 Demi Moore stars in this unusual psychological drama about two women caught between reality and imagination. Marie (Moore) is an American widow trying to raise two children under difficult circumstances in a small town in France. Marty (also played by Moore) is a successful businesswoman in New York City who wants to leave her busy life and lead a quieter existence in Europe. But Marty is just a product of Marie's imagination -- or at least that's what Marie thinks. Marty, on the other hand, is convinced that Marie is just someone she dreamed up. Who is right? Or are both of them wrong? And where does it leave the men in their lives (Stellan Skarsgard and William Fichtner)? Passion of Mind was the first English-language film from French director Alain Berliner, best known for the arthouse success Ma Vie en Rose.

Amanda Spencer
as Girl
View All

Critic Reviews for Passion of Mind

It's flawed and a bit convoluted, but worth seeing simply because the idea behind it is so intriguing.

Even by standards of Ron Bass, who has written soupy chick flicks, this fake emotional drama is a minor work; too bad French helmer Berliner made his English-speaking debut with this trifle

Demi Moore does what she can with a screenplay that doesn't seem confident about what to do with her. She is convincing as either woman, but not as both, if you see what I mean.

Never comes up with a compelling reason to care.

...there is too little happening here to sustain such a long movie.

Sometimes, with its candlelit castles and love scenes played out in spacious antique bathtubs, "Passion" seems less like a movie than it does a glossy catalog spread out all over the big screen.

Call me a cynic, there's only so much bitten back lovey-dovey looks I can take before wishing Jay and Silent Bob would show up and start cracking obnoxious jokes.

A lyrical and pensive romantic drama about the important roles dreams can play in our lives.

Audience Reviews for Passion of Mind