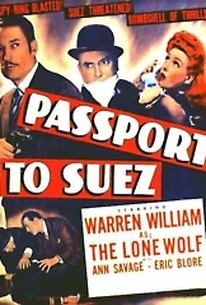 Though it's not made readily apparent by the title, Passport to Suez was the 10th entry in Columbia's "Lone Wolf" series. Warren William returns as amateur sleuth Michael Lanyard, aka the Lone Wolf, while Eric Blore is his faithful valet Jamison. In this outing, Lanyard finds himself in Alexandria, Egypt, where he works as an unofficial espionage agent for the Allies. Nazi spies threaten to murder Jamison if Lanyard does not agree to steal valuable military documents from the British Embassy. Among the suspicious characters weaving in and out of the proceedings are Johnny Booth (Sheldon Leonard), a "Rick Blaine" style café proprietor, and Valerie King (Ann Savage) a secret agent posing as a journalist. One of the film's cuter script touches is a trio of spies with "artistic" code names: Rembrandt, Cezanne, and The Whistler. ~ Hal Erickson, Rovi

Mal Merrihugh
as Chauffeur
View All

Critic Reviews for Passport to Suez

There are no critic reviews yet for Passport to Suez. Keep checking Rotten Tomatoes for updates!

There are no featured reviews for Passport to Suez at this time.