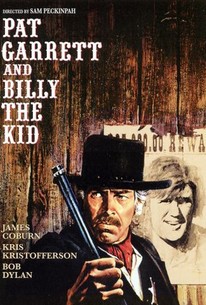 Critics Consensus: Sam Peckinpah tips his hat in mournful salute to the bygone West in this somber showdown, pitting a James Coburn against Kris Kristofferson in a meditative game of cat and mouse.

Critics Consensus: Sam Peckinpah tips his hat in mournful salute to the bygone West in this somber showdown, pitting a James Coburn against Kris Kristofferson in a meditative game of cat and mouse.

Critic Consensus: Sam Peckinpah tips his hat in mournful salute to the bygone West in this somber showdown, pitting a James Coburn against Kris Kristofferson in a meditative game of cat and mouse.

A former friend betrays a legendary outlaw in Sam Peckinpah's final Western. Holed up in Fort Sumner with his gang between cattle rustlings, Billy the Kid (Kris Kristofferson) ignores the advice of comrade-turned-lawman Pat Garrett (James Coburn) to escape to Mexico, and he winds up in jail in Lincoln, New Mexico. After Billy theatrically escapes, inspiring enigmatic Lincoln resident Alias (Bob Dylan) to join him, the governor (Jason Robards Jr.) and cattle baron Chisum (Barry Sullivan) requisition Garrett to form a posse and hunt him down. Rather than flee to Mexico when he can, Billy heads back to Fort Sumner, meeting his final destiny at the hands of his friend Pat, who, two decades later, is forced to face the consequences of his own Faustian pact with progress. With a script by Rudolph Wurlitzer, Peckinpah uses the historical basis of Billy's death to eulogize the West dreamily yet violently as it is desecrated by corrupt capitalists. Both Pat and Billy know that their time is passing, as surely as Garrett's posse knows that they are participating in a legend. Using familiar Western players like Slim Pickens and Katy Jurado, Peckinpah underscores the West's existence as a media myth, and he even appears himself as a coffin maker. Just as the bloodletting of Peckinpah's earlier The Wild Bunch (1969) invoked the Vietnam War, the casting of Kristofferson and Dylan alluded to the chaotic late '60s/early '70s present; the counterculture has little place in a corporate future. Also like The Wild Bunch, Pat Garrett was truncated by its studio; the cuts did nothing to help its box office. Key scenes, particularly the framing story of Garrett's fate, have since been restored to the home-video version. In this director's cut, Pat Garrett and Billy the Kid stands as one of Peckinpah's most beautiful and complex films, killing the Western myth even as he salutes it.

Kris Kristofferson
as Billy the Kid

Sam Peckinpah
as Will

Hit Movie Songs from the 1970s

Coburn offers more of his smiles as testimony to the wizardry of Old West dentistry, while Kristofferson ambles through his role with solid charm.

There is a sombre, mournful quality which places the film very high up in the league of great Westerns.

The mushy pretensions of Pat Garrett and Billy the Kid suggest either that [Peckinpah] has begun to take talk about his genius too seriously (it can happen to the best) or that he has fallen in with bad company.

It's a movie that exists almost entirely on one note -- a low, melancholy one -- and achieves what I thought would have been impossible for him Peckinpah: he's boring.

Peckinpah's final word on a genre he helped define, and the greatest movie you almost never got a chance to see.

Regardless of length, this is one of Peckinpah's most deeply-felt films, a true meeting of two like souls.

It's one of the great tragic true stories of the old wild West, the story of two outlaw friends ending up enemies as one turns over and becomes a lawman - expressly for the purpose of hunting down his friend.

One of the best westerns of the 70s, if not all time.

One of the most bittersweet films of Peckinpah's career.

Disclaimer: I saw the 1988 Turner Preview version of this film, which is 122 minutes long, and, unlike the compromised theatrical version, is supposedly the closest thing to Peckinpah's original intention for this film, which was a very troubled production. That being said, I'm still very mixed on this film. I wanna say that I really enjoyed it, and that I do kinda recommend it, but at the same time, it's still a flawed film, even if this version is apparently better than the original. So, I have some hesitation fully recommending it, but still think that you might wanna at least try to give it a watch, since there are some good elements. The stroy here is a rendition of the classic story about legendary outlaw, and his relationship to his former friends turned enemy lawman Pat Garrett. It was Peckinpah's final western, and, like many westerns made in the 70s, it's very reflective of the time ot was made, and reeks of very melancholy and elegiac overtones. This is a lyrical and somewhat poetic film, and I like that there is a blend of action and character development, but the way it's done, it's like, damn, who knew that Peckinpah could actually be kinda boring? Boring shouldn't really be associated with Bloody Sam unless you also throw in the word "not". Yet, there it is. This film is pretty slow, and though it is only 122 minutes, it feels a lot longer. I find it odd that this version is apparently what Sam was really going for, but hey, I never knew him personally, so maybe I shouldn't judge him too harshly. I love the cinematography though, because it is excellent, and the washed out grainy look is very fitting, The film has a very notable and talented cast, but their performances, though not bad, are kinda underwhelming, and do leave something to be desired. Bob Dylan's score, likewise, though not terrible, is also not as epic as it could have been. When Andrew Dominik made his Jesse James film, which is very similar to this, I loved it. Maybe it's because I wasn't used to his work, and had nothing to compare it to, like I do with this one. Perhaps I shouldn't be doing that, but hey, I don't know what to say. There are some really great moments, but I think the film could have just told this eic tale in a less meandering and heady fashion.

A good film though it has many flaws. When it's good, it's great.

A tale of honor, loneliness and betrayed friendship in Peckinpah's fashion. Bob Dylan's masterful and heart felt songs amplify the whole spectrum of this solemn and poetic farewell to a hero among criminals.