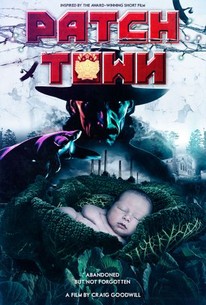 In North American folklore the stork delivers babies, but in Russian folklore, babies are born in the cabbage patch. Inspired by the award-winning short film of the same name, PATCH TOWN tells the story of Jon (Rob Ramsay), who has lived a sad life as an oppressed worker at a factory where hundreds of cabbage babies are born. Work on the assembly line is a thankless task of shucking, picking, and processing newborns to go out into the world and to their new adoptive mothers. But when Jon discovers the awful secret that he and all the indentured workers are actually grown-up and discarded toys, he'll have to take on a villainous corporation to reunite with his long-lost mother, protect his newfound family, and finally find freedom. (C) Kino Lorber

While the results are more creepy than charming - too childish for adults, though not necessarily too dark for children - it is hard to fault Mr. Goodwill for trying.

Patch Town has just enough laughs, imagination, and sincerity to follow through on its naked bids for cult adoration.

Patch Town finally displays a degraded cultural sensitivity that makes something as wretched as The Love Guru seem learned.

The tension required for the story to succeed never reaches a height, it fizzles out. Patch Town has good ingredients but they never reach their sazón, leaving them unable to transcend beyond cabbage soup.

Factory noir rears its head, when it comes to corporations, consumerism and the destructive pursuit of objects of materialistic desire. As the cabbage plant working stiffs in a different sort of scary movie, become the assembly line products themselves.

It's hard not to find something to love in a film that mixes elements of Toy Story, Bad Santa, Russian folklore, Cabbage Patch Kids and Les Miserables.

Watching the film, even though it's actually based on Russian folklore where, instead of the stork, babies are born in a cabbage patch, it sort of made me think of what a dark origin story of cabbage patch dolls would look like. And this is pretty much the movie that I'd probably make if I was to put pen to paper, so to speak. It's weird, but there's also parts of it that remind me of a 'darker' version of a Disney animated movie mixed in with some Tim Burton-esque elements. Let's just say that it's a film that it definitely borrows some things from various different sources . Yet, in spite of all of that borrowing, I think this film still stands as one of the more unique experiences I've had watching a film all year. Yes, it borrows from other sources, but I still think the film makes use of its influences while adding its own unique little twists and turns to the story, so it's not just a copy. However, I honestly don't think the film clicked as well as it probably should have. I don't know, there's just something about the film that didn't really click for me. And it's definitely not the low-budget 'feel', because they actually made the most out of the money they did have in making the film look pretty good considering the small amount of money that they had to work with. And I'm just assuming here, but you can tell which films have a smaller budget just by looking at them. I thought the film was well-cast. It's not like I would call the lead a particularly good actor, but I think he's more than likable enough to make him an easy character to root for. The comedic highlights of the film would, easily, Suresh John as Sly, the protagonist's friend, and Ken Hall as Kenny, creative, one of Yuri's henchmen. Those two are definitely entertaining characters. Not like they film easier to watch than it already is, but they do give it a lot of comedic highlights. I think the film is also less than 79 minutes long, so it's an incredibly short movie to watch and it's definitely not gonna overstay its welcome at all. Really, I honestly don't have much else to say about this movie. I think it's definitely a feather in the cap of Craig Goodwill, but, if he keeps at it, I think he's bound to make considerably better movies than this. But this is definitely more than a good start and I would easily recommend it. It's a good movie and it provides something different than what you normally see.