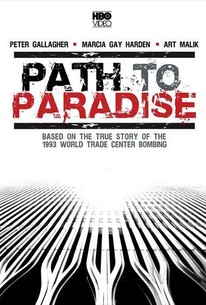 This engrossing made-for-television feature examines the circumstances leading up to and the aftermath of the badly botched 1993 bombing of the World Trade Center. By focusing more on the characters, both good and bad, than on the explosion itself, the film is able to avoid becoming another disaster movie.

There are no critic reviews yet for Path to Paradise: World Trade Center Bombing. Keep checking Rotten Tomatoes for updates!

There are no featured reviews for Path to Paradise: World Trade Center Bombing at this time.