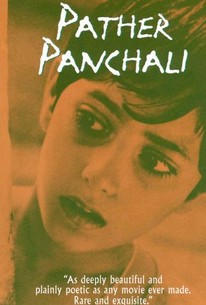 Pather Panchali (Father Panchali), Indian director Satyajit Ray's first feature film, relates the story of an impoverished Bengalese family. When the father (Karuna Bannerjee) leaves for the city to pursue a writing career, the mother (Karuna Banerji) is left with the responsibility of caring for the rest of the brood. Gradually, the film's true central character emerges: Apu (Subir Banerji), the family's son. Though excruciatingly realistic at times, Pather Panchali takes an occasional timeout to dwell on the purely cinematic. For example, when the mother receives a postcard bearing good news, Ray dissolves to a pond, where a pair of water skates scamper about. The music by Ravi Shankar at first seems to be at odds with the action; soon, however, we come to accept the music as a logical outgrowth of the events at hand. A multiple award winner, Pather Panchali was the first of Ray's celebrated "Apu Trilogy" (the other two entries were 1956's Aparajito and 1959's The World of Apu). The film was also released as The Song of the Road and The Lament of the Path. ~ Hal Erickson, Rovi

Runki Banerji
as Durga as a child

Subir Banerjee
as Apu/Sarbajaya the Mother

Kanu Banerji
as Harihar the Father

Uma Das Gupta
as Durga as a Young girl

Umas Das Gupta
as Durga as a young girl

Satyajit Ray put India on the world map with this felt portrait of life in a Bengal village...

Pather Panchali will leave many images in the mind's ye and many impressions of another way of life.

The cast has been well selected and all the players seem completely unaware of the camera. The results are a film which is unvarnished and often painfully vivid.

Although Pather Panchali falls short of perfection in production, the acting is impeccable and it hits you right in the heart.

Ray has caught the sights and sounds of nature all about them -- beauty side by side with ugliness -- with a poet's sensitivity.

Masterfully, Ray balances a growing sense of possibility and a feeling of irreplaceable loss. Its truth is obvious, its beauty no less.

It invites its audience not so much to watch from outside, as to participate.

Satyajit Ray speaks to the cruelty and kindness of humanity with perceptive depth in the tender first chapter of his Apu Trilogy.

[Santayjit Ray] is an artist of stature and depth. He has taken the day by day problems of a warm and wonderful family and created a film of far reaching beauty. His mind and camera are always in rapport.

These are the people of Pather Panchali, and the director, Satyajit Ray, has less told their story than beckoned to us quietly to come and listen while they tell it.

In its own novel idiom, at once Indian and universal, Pather Panchali has so much more to say than most films... Nor is its eloquence altogether visual. It also has a musical score by Ravi Shankar, to deepen both its moods. and its meaning.

Pather Panchali concludes with one of the most extraordinary evocations of grief ever captured on film, a wrenching scene that tears us out of our roles as complacent movie watchers and transforms us into participants.

Nothing spectacular at all. Entirely overrated. I like old movies (and foreign films) but hardly anything happens in this one!

An impressive achievement considering that this was Ray's first film, and he displays an enormous confidence in the direction of this hypnotizing and realistic look into the life of a Bengali family struggling with poverty as witnessed by the eyes of an eight year-old boy.

it's hard to believe satyajit ray and his cinematographer had never worked on a film before this. they had observed renoir filming the river and with his encouragement and the inspiration of italian neorealism made this poetic masterpiece about life in a small bengal village circa 1920, a really timeless film. i love films about india and i'm looking forward to the rest of this series. there's huge natural talent at work here

[font=Century Gothic]"Pather Panchali" is the first part of Satyajit Ray's Apu trilogy. This film focuses on a poor family with a prestigious past living in rural India. The father has dreams of becoming a writer/poet/playwright, even as he accepts a job to do a landowner's accounts to support his family.(It should be noted that we rarely see him or any of the other men of the village.) However, he does have a kind heart, one that clashes with the reality of the situation.[/font] [font=Century Gothic][/font] [font=Century Gothic]"Pather Panchali" is really a simple, uiniversal story, about a struggling family. There is not a lot of plot to speak of; it is much more character driven. I thought the camerawork was very graceful. The film quietly builds up to its powerful climax. [/font]