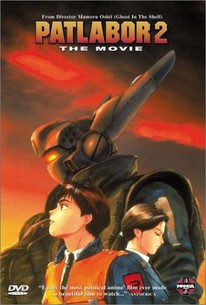 This animated feature is the sequel to Oshii Mamoru's dark and thoughtful Patlabor, based on a video and television series of the same name. Captain Goto finds himself and his colleagues in the Mobile Police Patlabor division, caught in a web of political intrigue as a disgruntled veteran of the Japanese Self-Defense Force leads a militant terrorist group into a violent assault against Tokyo. ~ Jonathan E. Laxamana, Rovi

There are no critic reviews yet for Patlabor 2. Keep checking Rotten Tomatoes for updates!

Tedious at times, but an overall quality flick that gives a serious approach to an issue that would have been simplified in any other film.