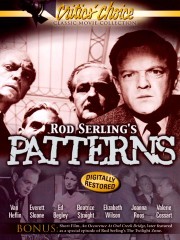 Marsha C
March 12, 2019
Just as relevant today as it was in 1956! Excellent acting by all and Rod Serling's writing adds humanity as he does to all his work as the force that keeps us having faith in each other. Rod Serling was a seer.

Andy F
December 9, 2018
This story of corporate power rings as true today as it ever did. Superb script and heartfelt performances.

Art S
May 28, 2017
Film version of Rod Serling's Emmy-winning teleplay targeting the cutthroat world of business and the moral lapses of those at the top (or the lapses necessary to get to the top). Also known as "Patterns of Power", as in "behavioural patterns", we are treated to the machinations that CEO Walter Ramsey (Everett Sloan) goes through in order to force Bill Briggs (Ed Begley Sr.) to resign as Vice President. You see, Briggs is too humane, carrying about people and not just profits, and Ramsey is not. We follow Fred Staples (Van Heflin) who is brought in from Ohio to the New York City headquarters as he discovers that he is meant to replace Briggs, even though Briggs has not left. This puts Staples into a moral quandary which he tries to solve by befriending Briggs and giving him credit at every opportunity, especially with the boss (although he does catch himself damning Briggs with faint praise at times). When Ramsey eventually hounds Briggs to the point of nervous breakdown, Staples tries to take a stand but finds himself agreeing to take over as Vice President, telling Ramsey he'll always speak truth to power. Since this is Serling, we can't exactly take Staples at face value; we wonder whether it is even possible not to be influenced by money and power, not to lose one's focus on people when profits are at stake, not to play politics with coworkers' lives. Powerhouse acting by all concerned (particularly Begley) and a sharp script keep things tense and biting, never didactic. Still relevant today.

Allan C
½ December 18, 2016
Smart corporate drama along the lines of "Executive Suite." Suite came out two years earlier, but this tale from screenwriter Rod Serling is far more cutting and acerbic. Van Heflin plays an new idealistic executive moving up from the trenches who's being groomed by corporate head Everett Sloane to replace Ed Begley. It's a film about ethics, greed, and abuse of power. Sloan gives a frighteningly strong performance at the corporate head. The board room scene where Sloan dresses down Begley in front of the other executives is so uncomfortable and so terrifying, it's possibly Sloan's best performance. I've never been a huge fan of Helfin and and actually have always been baffled how he became a star, but he is serviceable as an idealistic man-of-the-people type of executive. Overall, this is terrific drama who's politics about an uncaring bottomline driven corporate America is just as applicable today (if not more so) than it was in 1956.

John L
September 25, 2016
Great drama about workplace politics. Everett Sloane is unremitting as the vicious boss who hounds his subordinate (Ed Begley) to force him to resign. Van Heflin's character is caught in the middle, and Beatrice Straight is excellent as his wife, a sort of 50s version of Lady Macbeth. Taut script by Rod Serling.

An 'In your face' explicit movie about how corporate America works in real life, which may also be a reflection how the writer of this movie, by the name of Rod Serling of the "Twilight Zone" fame experienced from his own top executives. It's one of the examples about how employees can be dicked around. This movie requires 'no' irony as Serling is best known for, but rather a movie that is ahead of it's time, that is happening as of right now as we speak. It's an example about how corporate greediness can sometime overshadow human principle. And everybody has either seen or know someone like this, where if a fellow employee who has just started, and he is making twice the amount of money than the veteran worker does, who's been there for a really long time and still couldn't make anymore than what s/he is getting- that sort of thing.

It stars Van Hefflin as Fred Staples, who has just started to work for a wealthy corporation on his very first day, with all of it's employees there to greet him and so forth- including the second man on top, William Briggs played by acting legend Ed Begley as William Briggs. And immediately, William begins to like Fred as they begin to work together on a project. And it was at this point, would be the perfect example of 'don't give any credit, where credit is due', when Fred's boss, Walter Ramsey (Everett Sloane), wanted only Fred to take full credit on this particular project, even though William also helped him on it. Then the film turned to 'the main boss doing whatever it takes to drive the old fella out'. And the funny thing is, that it's like that in real life too, since they're many people who take great pride into stealing other peoples work or ideas before calling it as their own, such as J.K. Rowling of the "Harry Potter" fame, and Disney stealing plots, ideas, and characters to make the financially successful "The Lion King". Which anyone who's open minded can see for themselves that "the Lion King" is just the shorter equivalent version of a long running syndicated show in Japan called "Kimba, the White Lion", with the only difference is that not many North Americans had ever seen nor had heard of it. And at the same time, Disney executives turning it around, claiming that "The Lion King" came from MacBeth. They go, 'can't you see the similarities'. Or when long time faithful employees are laid off or fired just one day before retirement.

And yes, the ending of "Patterns" is also a revelation of what happens to people in general as well, as Fred stands tall claiming to be paid a bigger salary than the others. otherwise he'll walk.

Ken T
November 8, 2013
This is a very fine story with exceptional action and acting. Begley's never been better. Van Heflin's true to the role.

DAVID P
July 18, 2013
The dialogue of the movie was excellent

Eric D
February 11, 2013
Doesn't seem like this movie has aged a bit. The story is just as relevant today, as it was then. Maybe even more so...

Whit w
September 5, 2011
I shouldn't have been surprised by how good "Patterns" was. After loving nearly everything Rod Serling has ever written, how this totally pulled me in shouldn't have been unexpected. The acting is so fantastic, it was exciting to watch even though there was no action to be found. This is very tense and really had me understanding the internal tug-of-war that Fred Staples was having between a man he liked and respected and another man whom he detested but had the capacity to challenge and reward him.
The ending was a twist and it was very satisfying. I did not expect things to turn out the way they did.

James H
½ March 22, 2010
A simple film, it doesn't have a big budget, no big names involved. And it shows what you can do with brilliant character development, superb writing and a director who knows how to use it. It's a powerful story, just as poignant today as it was in 1956, and just as pertinent. The acting is excellent, from everyone. Van Heflin is well cast, Ed Begley is fantastic, Beatrice Straight and George Macready as well, but it's Elizabeth Wilson as the secretary that gives the best performance in the film. She is real and fully convincing. You get so involved with the characters and you care about them. The pacing is perfect. A superb study of people, morals and relationships. It's not a film you can easily forget.

James H
March 22, 2010
88/100. A simple film, it doesn't have a big budget, no big names involved. And it shows what you can do with brilliant character development, superb writing and a director who knows how to use it. It's a powerful story, just as poignant today as it was in 1956, and just as pertinent. The acting is excellent, from everyone. Van Heflin is well cast, Ed Begley is fantastic, Beatrice Straight and George Macready as well, but it's Elizabeth Wilson as the secretary that gives the best performance in the film. She is real and fully convincing. You get so involved with the characters and you care about them. The pacing is perfect. A superb study of people, morals and relationships. It's not a film you can easily forget.

Clarence G
August 14, 2009
For those of you that only know Rod Serling from "Twilight Zone", this might be a surprise. Van Heflin is outstanding as an Ohio engineer who moves into the "big time" in a large corporation. Everett Sloane plays his ruthless, maipulative boss and is fantastic. Ed Begley, Sr. is great as the longtime employee that Heflin's character is brought in to replace.

I actually picked this up on DVD at K Mart for under two bucks with the short film "An Occurence At Owl Creek Bridge" as a bonus feature. What a bargain!

John Z
March 5, 2008
Written by Rod Serling...this is an outstanding movie on surviving in the corporate world
Page 1 of 2