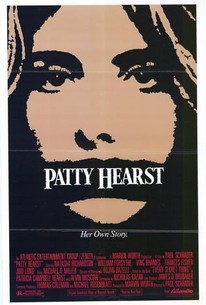 In this docudrama, Natasha Richardson plays Patty Hearst, the heiress to her family newspaper fortune who was kidnapped and allegedly brainwashed by members of the radical Symbionese Liberation Army (SLA). She is blindfolded and stuffed into a closet for 57 days and subjected to the philosophies of her SLA captors. She is later offered her freedom but elects to join the group, and Hearst and the gang proceed to go on a rampage of well-publicized bank robberies. Since the story is told from the point of view of the victim -- from her book -- the feature attempts to portray her plight sympathetically. Was she the victim of ruthless political extremists or a spoiled rich girl playing out her counterculture fantasies? The truth probably lies somewhere in between. Twenty years after the kidnapping, her SLA counterparts were still in jail while Hearst, married with children, made the rounds of television talk shows. She is perceived as someone whose incredible financial resources kept her from prison, and her stories of being the terrorized victim are unconvincing at best.

Ermal Williamson
as Randolph A. Hearst

This stylized movie of ideas is a lean, impressive piece of work.

The entire film centers on the remarkable performance by Natasha Richardson as Hearst. She convinces us she is Hearst, not by pressing the point, but by taking it for granted.

It's a portrayal both sympathetic and grotesquely funny at times.

Schrader's low-key approach to the tabloid story is refreshing. Richarson is magnificent.

Strange true story of the kidanpping of an American Princess as I believe what happened to her.