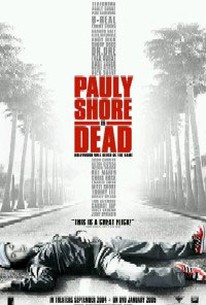 Can death be a good career move? The star of Bio-Dome, Jury Duty, and In the Army Now decides to find out in this satirical comedy. Pauly Shore (playing himself) takes a role on a new situation comedy series for FOX TV after a string of awful movies puts paid to his film career, but when the show is axed at the last moment, Shore finds himself flat broke and unable to find work in Hollywood. At the end of his rope, one night Shore is visited by the ghost of comic Sam Kinison, who suggests that killing himself might be the answer. Shore lacks the nerve to go quite that far, but he goes half-way by faking his own death and is amazed to discover an outpouring of post-mortem enthusiasm for him and his body of work, with the dead comic now praised as a genius; however, as Shore tries to figure out how to capitalize on this outpouring of acceptance, word begins to spread that the comic is actually alive and well, which only causes more problems for him. Produced under the title You'll Never Wiez In This Town Again, Pauly Shore Is Dead was written and directed by Shore himself and features an impressive list of celebrity cameos including Chris Rock, Sean Penn, Ellen DeGeneres, Britney Spears, Vince Vaughn, Andy Dick, Paris Hilton, and lots more.

Pauly Shore
as Himself

Jaime Bergman
as Herself

Sean Penn
as Himself

Fred Durst
as Himself

Tom Sizemore
as Himself

Chris Rock
as Himself

Heidi Fleiss
as Herself

Ellen DeGeneres
as Herself

Pamela Anderson
as Herself

Tommy Chong
as Himself

Andy Dick
as Himself

Paris Hilton
as Herself

Britney Spears
as Herself

Jerry Springer
as Himself

Vince Vaughn
as Himself
View All

Will probably matter only slightly to Shore's fans, but this patchy film will hardly deliver Shore the crossover breakout he so sorely desires nor the admiration due a talented film auteur.

Key revelation is that Shore is a bitter, unpleasant, petty, humourless little man--and that his stoned weasel song and dance isn't doing that great a job of hiding it.

Pauly Shore is dead... In your dreams, bud-dee!

...the movie turns into a game of spot the cameo more than anything else.

While it is indeed pretty funny, the darkness got lost somewhere in the shuffle.

Shore's contempt extends well beyond himself to tar his fans and just about anyone who might be in the audience.

It works as a throwaway joke -- occasionally funny and often shamelessly tasteless. And it also helps if you like Shore.

A very funny, blatantly satirical and insolently honest look into the life of the former it boy.

A delightful surprise that'll raise as many questions as it does bust guts.A very funny, blatantly satirical and insolently honest look into the life of the former it boy

Perhaps this will be the calling card that welcomes Shore back to fold... or maybe it's just a suitable farewell.

While catching a Pauly Shore movie might rank somewhere slightly below self-tracheotomy on the To-Do lists of most people, I'm about to tell you something quietly shocking -- this is actually one of the funnier movies I've seen in a while.

Decent mockumentary on forgotten actor Pauly Shore where he spoofs himself, this is a pretty original film, and considering that Shore is so-so, this is actually a pretty original idea for a film. This film is imperfect and has many flaws, but I'm somehow found it enjoyable. If you're familiar with Pauly Shore, you'll know he's always had one trick up his sleeve, and people got fed up rather quickly with him. I enjoyed Son in Law and Encino Man, but the rest of his films were bad to mediocre, using the same tired out joke that made Shore popular. Pauly Shore fans will enjoy this film, and I'll admit, I liked the film, and I thought it was really original, but it fell short on its potential of what it could have been. The jokes are decent, and never anything good, however it did make me smile at how stupid this film was. You got to give Pauly Shore props, he was able to make fun of himself in quite the manner, and he was able to pull off something, better than most of his early films combined. This is worth seeing if you like his work. I liked two films of his, and basically gave up on the guy after In the Army Now and Bio Dome. This film manages to be funnier than his later films, and it's a pretty decent try at a mockumentary, even if it's nothing ever good. Pauly Shore fans should definitely check this film out and they're sure to love this as much as his other films, but for viewers who hate the Weasel, they may want to skip this one altogether.

Painfully unfunny. I actually like Pauly Shore, but this film is bulls***! The successful joke ratio here is about one in a hundred, and I'm not even exaggerating. Man, this film actually made me forget that films can actually be funny! Just avoid this... PLEASE!

I have beef with this movie because it killed our TV. We had a TV/VCR combo and the tape wouldnt eject. And once I pried it out of the VCR, the TV kept thinking there was a tape, so it would "rewind" and then turn off everytime we turned it on. I couldn't really tell you anything about the movie actually.