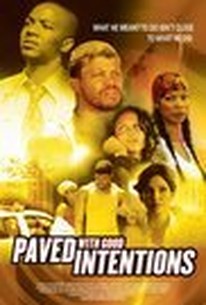 Balden (J. August Richards) was a successful businessman whose adoring father always preferred him over family black sheep Rick (Sharif Atkins). Things for Travis went unexpectedly bad, however, when the pressures at work become too much to bear, a suspicious stock sale prompted a serious investigation, and his wife walked out on him for neglecting their marriage. As a result, Travis ended his own life in a shocking act of violence. In the wake of Travis' death, his brother Rick returns to town to check in on grieving sister Nina. When their father catches wind of Rick's visit, he makes it plain to his son that the wrong boy was buried. Infuriated that his father always favored Travis, Rick sets out to prove that his sibling wasn't the angel that everyone credited him with being. But in the course of Rick's dangerous investigation he realizes that his brother's death was much more complicated than anyone realized, and that perhaps it wasn't his father's eyes that needed to be opened, but his own instead.

There are no critic reviews yet for Paved With Good Intentions. Keep checking Rotten Tomatoes for updates!

There are no featured reviews for Paved With Good Intentions at this time.