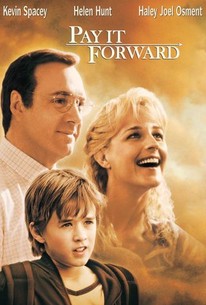 Critics Consensus: Pay It Forward has strong performances from Spacey, Hunt, and Osment, but the movie itself is too emotionally manipulative and the ending is bad.

Critics Consensus: Pay It Forward has strong performances from Spacey, Hunt, and Osment, but the movie itself is too emotionally manipulative and the ending is bad.

Critic Consensus: Pay It Forward has strong performances from Spacey, Hunt, and Osment, but the movie itself is too emotionally manipulative and the ending is bad.

A young boy stumbles upon a simple way to change the world in this drama. Trevor (Haley Joel Osment) is a bright 11-year-old boy who comes from a troubled home; his mother Arlene (Helen Hunt) is an alcoholic trying to hold down two jobs to support her son, while Trevor's father Jon Bon Jovi) left his family behind some time ago. At school, Trevor's class is introduced to their new social studies teacher, Mr. Simonet (Kevin Spacey), a guarded man with severe facial scars. Simonet gives his class an unusual assignment -- think up a practical way to make the world a better place, and put it into action. Trevor comes up with the notion of "Pay It Forward" -- do a needed favor for three different people without being asked, and then ask them to do the same for three others. Trevor starts by letting Jerry (James Caviezal), a junkie living on the streets, stay in his home. Next, he tries to fix Arlene up with Mr. Simonet, since both seem to be lonely and the clean and sober teacher might help Arlene stay away from alcohol. Finally, he tries to rescue one of his schoolmates, who is constantly tormented by bullies. Meanwhile, journalist Chris Chandler (Jay Mohr) finds himself stuck on the road without a car late one night when a man stops and give him the keys to a new car, asking him only to pay the favor forward to someone else; astonished, Chris wants to find out where this philosophy came from. Based on the novel by Catherine Ryan Hide, Pay It Forward also stars Angie Dickinson and Liev Schreiber. ~ Mark Deming, Rovi

Critic Reviews for Pay It Forward

A bit syrupy, but sentimental teens may enjoy it.

if this is what Hollywood considers serious, important filmmaking, maybe the movie industry should stick to the low road. Directed with the in-your-face subtlety of a sitcom, the tone of the movie is weirdly miscalculated from the get-go.

Spacey and Hunt create interestingly layered characters who are hiding parts of themselves from themselves. And come Oscar time, Osment once again may be saying, 'I see tuxedoed people.'

Less a worthy achievement than a nice try.

With its smorgasbord of moralizings, Pay It Forward is a confusing welter of sentiment.

Not since Gump has there been such a pandering, faux-virtuous package of populist pap for Hollywood to shove in the faces of electioneering politicos and say: Look, we don't just market unwholesome swill to families, we market wholesome swill, too.

For such a self-righteous movie, Pay It Forward has its own share of racism, class snobbery and spurious moralism in this sloppy attempt to help Americans get in touch with themselves made by a group of people who are out of touch with reality.

Ironic, isn't it, that a film about human decency takes place in Vegas?

The film seems manufactured to furrow a cynic's brow before bringing up their lunch.

There is a clear-cut difference between 'Oscar bait' and 'Oscar worthy,' which Mimi Leder's sentimental crock of a drama illustrates all too well.

Despite a ton of good intentions, the picture is numbingly obvious and crushingly sentimental.

It is a movie that will not only find but charm -- or should we say con? -- a certain kind of audience.

Audience Reviews for Pay It Forward

This is one of those heavy-handed liberal "message" films, but the idea of it won't leave you too quickly as the actors do a pretty good job at nearly covering that fact up. Helen Hunt is really good, duh, of course.

want to see it