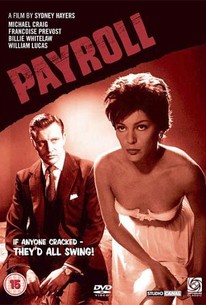 Payroll (I Promised to Pay) Photos

Billie Whitelaw dominates this crime melodrama, not as a criminal but as vengeful bystander Jackie Parker. Parker's husband, an armored car driver, is killed during a carefully orchestrated robbery. The police have an idea of who's responsible, but they lack proof. On her own, Parker goes after the suspects one by one, using psychological torture (phone calls, poison pen letters) to break them down. She reduces inside man Pearson (William Lucas) to a quivering mass of gelatin, and indirectly sends Monty (Kenneth Griffith) to a sticky end in a mire of quicksand. The film's climax is a showdown between Parker and gang boss Mellors (Michael Craig). Payroll was based on a novel by Derek Bickerton. ~ Hal Erickson, Rovi

Bruce Beeby
as Worth

Critic Reviews for Payroll (I Promised to Pay)

The one pleasant surprise about this lamentably slanted film is the French actress Francoise Prevost, who manages to give the bad girl in a banal situation humanity and warmth, Miss Whitelaw, of course is good however she slants, but that's no surprise.

There are no featured reviews for Payroll (I Promised to Pay) at this time.

Payroll (I Promised to Pay) Quotes