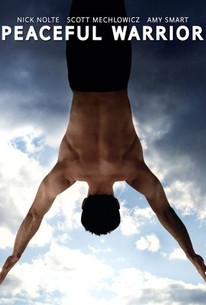 Critics Consensus: Based on a best-selling memoir, Peaceful Warrior loses something in the transition from page to screen. It hits the viewer over the head with philosophical jargon, and ultimately fails to live up to its source material.

Critics Consensus: Based on a best-selling memoir, Peaceful Warrior loses something in the transition from page to screen. It hits the viewer over the head with philosophical jargon, and ultimately fails to live up to its source material.

Critic Consensus: Based on a best-selling memoir, Peaceful Warrior loses something in the transition from page to screen. It hits the viewer over the head with philosophical jargon, and ultimately fails to live up to its source material.

Dan Millman is a gifted young athlete bound for Olympic gold who will do anything to be the best. Driven by success, Dan has got it all: trophies, fast motorcycles, fast girls, and wild parties. But Dan's world is turned upside down when he meets a mysterious stranger in a gas station who holds the power to tap into new worlds of strength and understanding. The young man discovers that he has much to learn and even more to leave behind in order to master this new vision of greatness in this moving tale about the power of human will.

Scott Caudill
as Thug One

Bart Connor
as As Himself

Jim Bradley
as Commentator One

Dan Millman
as Man in Car

Neil Furuno
as Gymnast One

Tom Tarantini
as Thug With Gun
View All

[A] watchable exercise in Zen hokum.

Maybe there are worthy films buried in collections of spiritual homilies, but Peaceful Warrior is not one of them.

Don't go see Peaceful Warrior. Don't tell your friends about it. Try to forget you ever heard of the movie. Clear your mind and live in the now.

A movie about spiritual awakening that plays like a spliced-together string of New Age fortune cookie messages.

Starting with the title and extending everywhere else, Peaceful Warrior is blatantly ludicrous.

You're in the moment all right, experiencing every passing minute ticking off in slow motion until the blasted thing comes to a merciful end.

The film's tone is indeed mystically propelled, but while these elements seem far fetched, the sheer depth of commitment by the cast make us overlook that.

This is an average movie that's chock-full of New-Age-y self help. And not much else.

claims to be 'inspired by true events'; the movie does not, however, specify the planet on which these events allegedly took place. ... a perfect companion piece to last year's dim-witted 'Stick It'...

Warrior is a good-looking film that feels more like an allegory about the power of positive thinking than a drama.

Kind of like a modern day Karate Kid, but with gymnastics instead of karate and with a whiskey- voiced Nick Nolte in the role of the old and wise "sensei", instead of Mr Miyagi. This movie might not be as good or memorable, but it's not that far from it either, as it does have a pretty solid and inspiring story. Even more so as it happens to be based on true events. It wouldn't have hurt with a little faster pacing though, because its draggy nature was unfortunately a bit off-putting and the biggest reason to why I couldn't give it more than 3 out of 5 stars.

Another film inspired by actual events. While not as entertaining and comical like other films based off of actual events, this film is still an inspiring movie.

The story moves along really really slowly. This is what will probably disappoint people the most. As mentioned earlier, this film is based on true events, but it is OK to twist and turn the story a bit to make it funny and entertaining. A successful example of this is Cool Runnings. A true inspiration for the children. While this film is slow and a little bit boring, it does add a tiny tiny dash of science fiction into the mix, which will keep your interest from time to time.

The cinematography also helps this film a lot. The nice camera work takes what could be mediocre shots and turns them into pieces of art. Well, maybe I'm over exaggerating a little bit. I've seen better shot films, but I've also seen worse. The ending of this film is probably the most dramatic part of the film and the final shot ends the film nicely. Some people may not like it, but most people should appreciate it.

Nick Nolte really carries this film with his performance. No Nick Nolte equals lower rating. While his acting is good, his dialgoue isn't as great. His philosophical words actually starts out pretty interesting, but as the movie goes by it becomes old rather quickly. The beautiful Amy Smart is really underused. She has very little airtime, but at least her role is pretty important.

In the end, this can be a moving film, but it will only cater to certain people. If you don't mind a slow dramatic film, gymnastics, and Nick Nolte, this film is for you.

Not for the faint of heart, or mind. This is indeed a deep and inspiring movie, oftentimes we ourselves question why we do what we do. Confronting that, is the hard thing.

A very touching movie-- if you don't mind a little preachiness and a little cheese. Get that out of the way and what you're left with is a truly uplifting story that might even inspire you a bit.